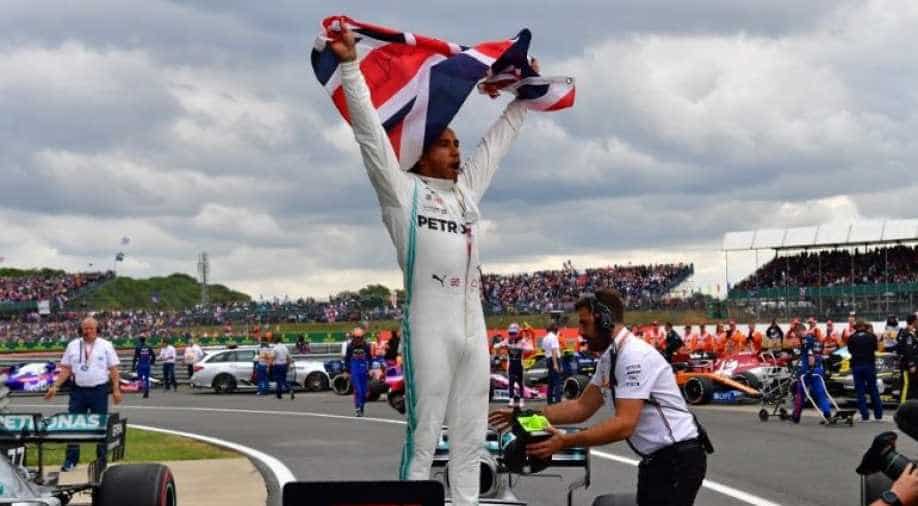 Lewis Hamilton made the most of a favourable safety car intervention on Sunday to claim a record sixth British Grand Prix victory at a packed Silverstone.

The Briton moved 39 points clear of the Finn behind in the title race, but Bottas was unlucky with the timing of the safety car which effectively gave Hamilton a free pit stop.

Charles Leclerc of Ferrari was third.

Pierre Gasly finished fourth ahead of his Red Bull team-mate Max Verstappen, whose race was compromised by a late collision when Sebastian Vettel of Ferrari drove into him, and Carlos Sainz of McLaren.

It was Hamilton's seventh win in 10 races this year and the 80th win of his career. He had shared the British Grand Prix record of wins, on five, with fellow-Briton Jim Clark and Frenchman Alain Prost.

Daniel Ricciardo was seventh for Renault ahead of Kimi Raikkonen of Alfa Romeo, Daniil Kvyat in a Toro Rosso and Nico Hulkenberg in a Renault.

"What a day," said Hamilton. "To all the crowd, thank-you so much for coming out."

Hamilton, who stopped on his slow-down lap to collect a British 'Union Jack' flag, added: "I love you Silverstone. I appreciate everything and the opportunity to be a part of this.

"I couldn't have done this without these guys or without my team."

A glum Bottas said: "Congrats to Lewis...It wasn't my day."

A much happier Leclerc said: "It's probably the race I've enjoyed the most in my career."

The safety car was deployed when Antonio Giovinazzi spun into a gravel trap in his Alfa Romeo – gifting Hamilton a 'free' first, and only, pit stop. The luckless Bottas, on a two stop strategy, had already pitted before the incident.

On an overcast and cool afternoon, Justin Whiting, the 12-year-old son of the late Charlie Whiting, the official Race Director who died suddenly in Melbourne in March, started the race. before a crowd of 141,000 at Silverstone.

As the lights went out, the Mercedes pair pulled clear, Hamilton chasing Bottas throughout the first lap ahead of Leclerc and Verstappen with Vettel fifth.

By lap 10, the lead was three-tenths, Hamilton oozing confidence could not pass Bottas slithering to protect his lead. Behind them, Leclerc blocked attacks from Verstappen.

But on lap 17, Bottas came in for a new set of mediums and Hamilton inherited the lead ahead of Vettel, the pair delaying their stops as long as possible. Then Giovinazzi beached his Alfa Romeo at Club.

Hamilton took advantage and pitted for hards, followed by Vettel and Verstappen, making a second stop. Ferrari, reacting slowly, called in Leclerc, who emerged  sixth behind Gasly and Verstappen. All this left Hamilton leading Bottas with Vettel third.

Racing resumed on lap 23, the field, backed up by Hamilton, swarming like bees at the re-start.

Bottas, on mediums, traded fastest laps with Hamilton, knowing he had to make a second stop. Verstappen, helped by quick thinking from Red Bull, rose to fourth when Gasly moved over on Hangar Straight and began his pursuit of Vettel.

The Dutchman caught and passed him at Stowe only for the German to ram into the rear end of the 007-branded Red Bull, who had Bond actor Daniel Craig in their garage, both spinning into the gravel but surviving to re-join the fray.

A stewards' investigation followed, but both races were compromised.

Leclerc rose to third and Gasly to fourth. Verstappen regained fifth while Vettel pitted for a new nose, fell to 17th and was then given a 10-seconds time penalty.

With eight laps remaining, Hamilton was told to pit, but ignored the call, persuading Mercedes to bring in Bottas for softs, a tilt at fastest lap and a secure run to the flag.