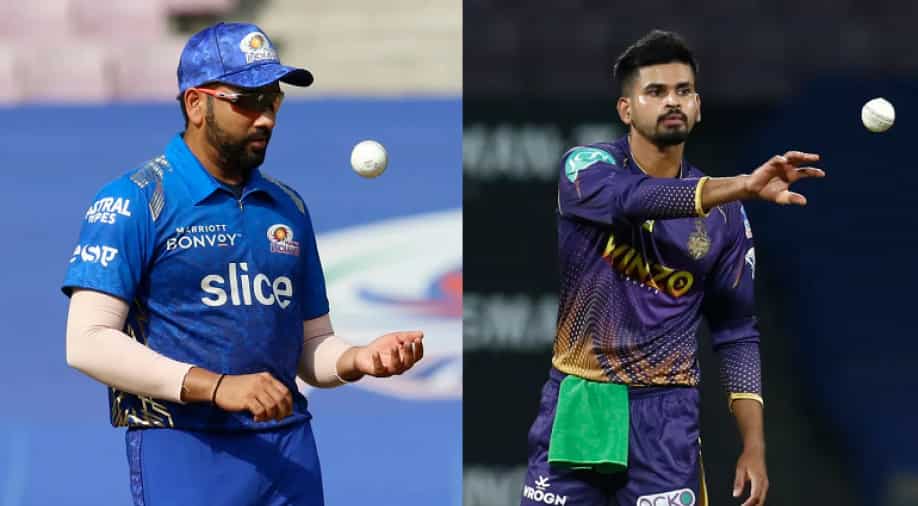 Mumbai Indians will be looking for their first win of the season when they take on KKR. | Photo - IPL | Photograph:( Others )

Mumbai Indians (MI) will be desperately looking to bag their first win of the ongoing IPL 2022 when they lock horns with Kolkata Knight Riders (KKR) at the MCA Stadium in Pune on Wednesday. Here is our prediction for the game.

Mumbai Indians (MI) have had a woeful start to their campaign in the ongoing Indian Premier League (IPL) 2022 as they are yet to get off the mark in the tournament after back-to-back defeats in their first two games this season. Mumbai Indians lost to Delhi Capitals by 4 wickets in their opening game before Jos Buttler's sensational hundred helped Rajasthan Royals thrash them in their last outing.

Mumbai Indians' bowling owes have been left exposed this season as ace pacer Jasprit Bumrah is failing to find support from the other end. While Bumrah was excellent with a three-wicket haul while conceding only 17 runs against RR, none of the other MI pacers could make an impact.

Murugan Ashwin has played as the lone spinner in the team so far but has failed to impress as MI have struggled to pick wickets in the middle overs. Rohit Sharma & Co. will hope for a batter show from the bowlers when they lock horns with Kolkata Knight Riders (KKR) in their third game of the season at the MCA Stadium in Pune on Wednesday.

Against a KKR batting line-up consisting of the likes of Shreyas Iyer, Nitish Rana, Venkatesh Iyer and Andre Russell who can take down any bowling attack on their day, MI bowlers will have to step up and deliver as an off day from them can prove costly for the team's chances.

Kolkata Kight Riders have won two out of their first three games this season and have appeared as a confident unit under new skipper Shreyas Iyer. KKR's middle-order remains a concern for the franchise and skipper Iyer will have to control his urge to big against spinners to ensure he can stay in the middle for longer and anchor the innings for his side.

Also Read: Apple, Amazon and others express interest as battle for IPL media rights heats up

With Umesh Yadav in fine form, KKR have been excellent with the new ball during the powerplay but there remain concerns in death overs. Andre Russell's fitness will be key as the all-rounder's contributions with the ball are vital for KKR's chances. While KKR will be looking to continue the winning momentum, MI will hope to get their first win in the bag on Wednesday.

Mumbai Indians are used to facing the early jitters in a new season but Rohit's men have a lot to work upon and improve as the season progresses. KKR will be high on confidence after comprehensive win over Punjab Kings in their last game and are likely to continue their winning momentum at the MCA Stadium in Pune on Wednesday.