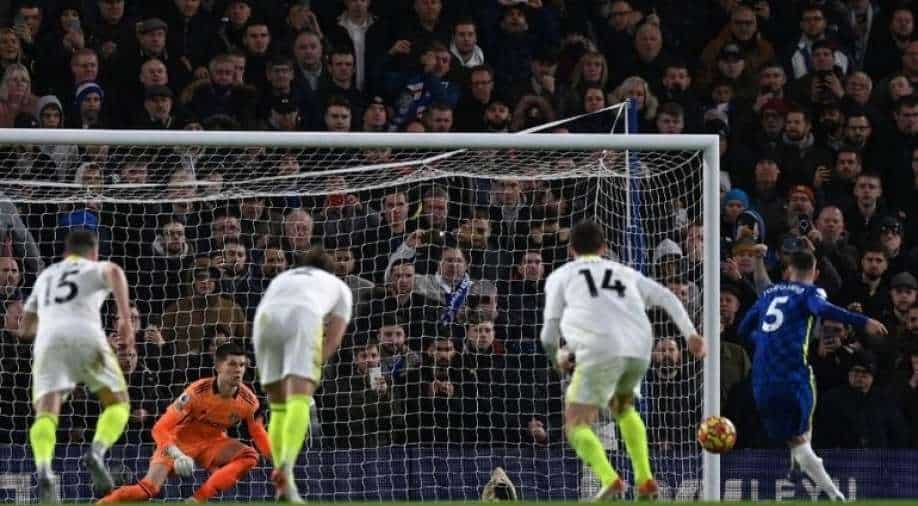 Jorginho held his nerve to score a stoppage-time penalty as Chelsea snatched a dramatic 3-2 win against Leeds on Saturday.

Thomas Tuchel's side bounced back from their two-game winless run but not before surviving a major scare at Stamford Bridge.

Leeds went ahead through Raphinha's first half penalty and Chelsea drew level thanks to Mason Mount's strike.

Jorginho, playing through the pain of a recurring back problem, netted the first of his two penalties after the interval, only for Leeds teenager Joe Gelhardt to equalise with seven minutes left.

It was a vital victory for Chelsea after their top-flight defeat at West Ham and midweek draw against Zenit Saint-Petersburg in the Champions League.

Having won only three of their previous seven games in all competitions, Tuchel will be pleased with the way Chelsea ground out a hard-fought success after surrendering pole position last weekend.

But once again, there were concerns for the Blues boss as Chelsea laboured for long periods and conceded twice, taking the amount of goals shipped by their previously rock-solid defence to eight in three games.

Tuchel had demanded his players stopped sitting on leads following their failure to hold onto the advantage against West Ham and Zenit, but they did not heed his warning.

With N'Golo Kante, Mateo Kovacic and Trevoh Chalobah all sidelined, Tuchel was fortunate that Jorginho was willing to play through the pain barrier.

The Blues were behind in the 28th minute when Marcos Alonso upended Daniel James and Raphinha made no mistake with his penalty.

They equalised three minutes before half-time when Alonso robbed Stuart Dallas, who had failed to control Illan Meslier's pass, before sending a low ball to the near post.

Mount peeled off the defensive cover and swept into the net to level the clash, with the out-of-sync hosts mightily relieved to be on terms at the interval.

Chelsea were more measured after the break, eventually taking the lead with a 58th minute penalty.

Raphinha scythed through Rudiger and the spot-kick was duly awarded after a VAR review, with Jorginho slotting into the top corner.

Just when Chelsea thought they could celebrate, substitute Gelhardt fired his maiden Leeds goal with his first touch in the 83rd minute.

But Tuchel's team refused to roll over and Jorginho finally secured the victory in the final seconds.