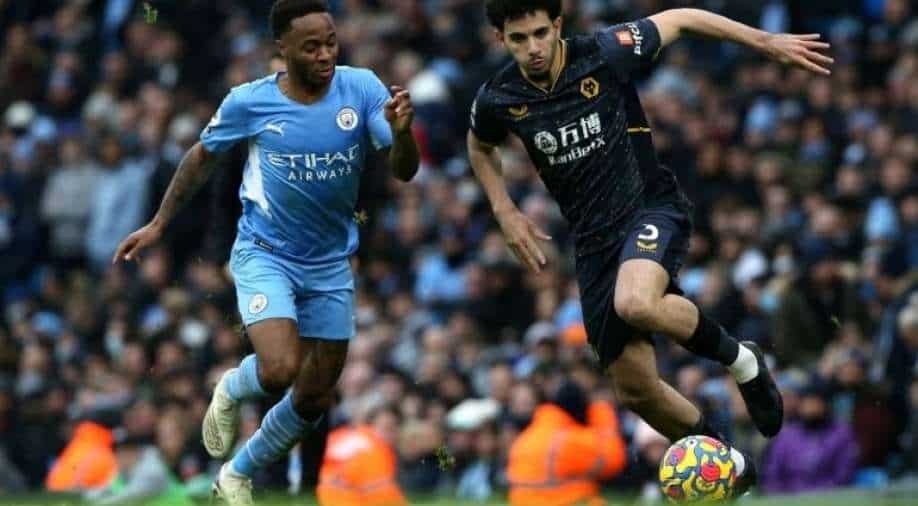 Pep Guardiola's side are four points clear of second placed Liverpool, who can close the gap if they beat Aston Villa at Anfield later on Saturday.

Raheem Sterling scored his 100th Premier League goal as the Manchester City forward's penalty fired the leaders to a 1-0 win against 10-man Wolves on Saturday.

Sterling netted from the spot in the second half at the Etihad Stadium to clinch City's sixth successive league victory.

City's cause was aided by a needless first half red card for Wolves striker Raul Jimenez, who was dismissed for failing to retreat the required 10 yards before a free-kick he had been booked for conceding seconds earlier.

Sterling's landmark goal ensured City capitalised on Jimenez's blunder as they survived an average display to get back on track after the midweek Champions League defeat at Leipzig.

After struggling to get into Guardiola's starting line-up at times this season amid talk of a potential transfer, Sterling is finally showing signs of recapturing the scintillating form that made him such a dangerous force.

Pep Guardiola's side are four points clear of second placed Liverpool, who can close the gap if they beat Aston Villa at Anfield later on Saturday.

Kyle Walker was dropped to the bench after City's right-back was criticised by Guardiola following his red card at Leipzig.

Guardiola made eight changes from the Leipzig game, with Phil Foden, troubled by an ankle problem, and Kevin De Bruyne, recovered from the coronavirus, named as substitutes.

Bernardo Silva had scored six goals in his previous eight league appearances and the City playmaker was inches away from adding to that total when he bent a curler just over the bar in the opening minutes.

Joao Cancelo's lung-bursting breaks from right-back were a constant threat in the first half and he advanced again for a low strike that tested Wolves keeper Jose Sa.

Wolves duo Max Kilman and Ruben Neves needed lengthy treatment after a nasty clash of heads that left Kilman with blood pouring from a cut.

Jimenez, the victim of a fractured skull in a collision with David Luiz at Arsenal last season, was quick to check on his team-mates, who were both able to continue playing.

It was Jimenez who didn't make it to half-time as the Mexican saw red in needless fashion.

Booked for a tug on Rodri, Jimenez stupidly stuck out a foot to block the resulting free-kick without retreating 10 yards, earning his second yellow card 48 seconds after the first.

Jimenez ripped off his protective headband and swung it around in frustration, but he could have no complaints about his self-inflicted exit.

With the numerical advantage, City monopolised possession after the interval.

ALSO READ: Ralf Rangnick says he does not have to persuade Paul Pogba to stay at Manchester United

Silva and Sterling got in each others way as they failed to finish off Oleksandr Zinchenko's cross.

City's pressure finally produced a goal in the 66th minute.

Joao Moutinho blocked Silva's cross with a raised arm and, although the ball appeared to hit the midfielder's armpit, VAR confirmed Jon Moss's decision after a check.

Sterling stroked the spot-kick down the middle for his fifth goal in his last eight City appearances.

Jack Grealish poked wide from close range and Jesus was denied by Sa in the closing stages.

City had done just enough but Ederson had to tip over Kilman's header before the points were secured.