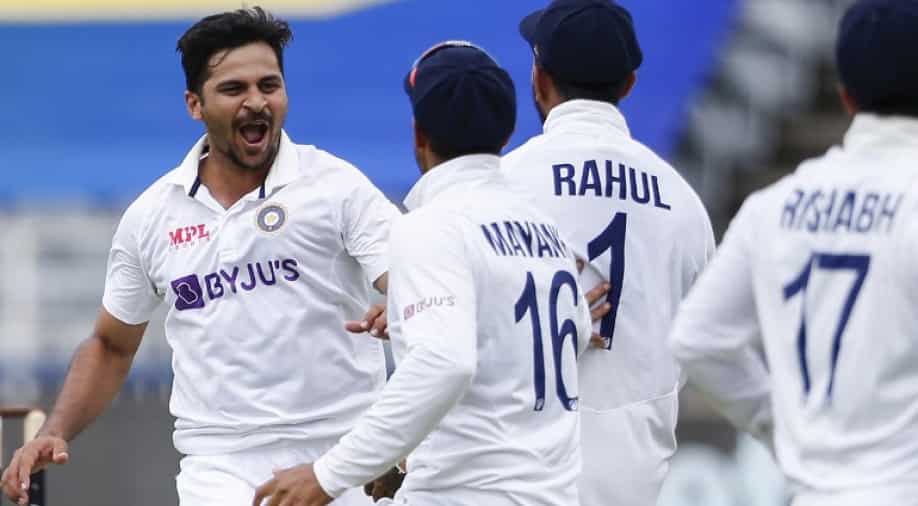 Fans erupted on Twitter as Indian pacer Shardul Thakur picked up a five-wicket haul on Day 2 of the ongoing second Test against South Africa in Johannesburg.

Shardul Thakur bowled a fiery spell on Day 2 of the ongoing second Test between India and South Africa at The Wanderers in Johannesburg as he ran through the Proteas batting line-up with a five-wicket haul. Thakur was exceptional with the ball as he helped India stage a fightback after the visitors had managed only one wicket in the first 38 overs of South Africa's innings.

Thakur drew the first blood for India on Day 2 as he got rid of Dean Elgar on 28 to break the 74-run stand between him and Keegan Petersen. He then dismissed Petersen and Rassie van der Dussen in quick succession to pile on more pressure on the hosts. Thakur completed his fifer with the wickets of Temba Bavuma and Kyle Verreynne.

The exceptional spell from the Indian pacer saw fans come together to laud him on social media. The fans went berserk on Twitter as 'Lord Shardul' as Thakur is famously referred to as by the fans, started trending on the micro-blogging site. Fans shared hilarious messages and memes lauding Thakur, who picked up his maiden Test fifer in South Africa.

Check out some reactions:

Lord Shardul and team India believe in fair play. That's why Lord never bowls to new batsmen, he's only brought on once there is a partnership and the batsmen are set. Lord still gets them out though #SAvIND

It has happened. Five-wicket haul. An empty stadium, but I can hear the Gods of cricket clapping and wiping tears. Incredible.

It's not India vs SA anymore it's Lord Shardul Thakur vs SA.

Scientists are researching on how Shardul Thakur after taking 1 wicket takes another. But after researching they realised that he is the Lord.

Thakur, who was not part of India's playing XI in the first Test in Centurion, was the pick of the bowlers for the visitors on Day 2 of the second Test. The Indian pacer wreaked havoc with the red cherry as he ran through the Proteas top-order picking up the important wickets of the likes of Van der Dussen, Elgar and Bavuma among others.

Also Read: Out or not out? Rassie van der Dussen's dismissal in 2nd Test against India sparks controversy - WATCH

It was Thakur's maiden five-wicket haul for India in Tests as he became the sixth Indian bowler to take a fifer at The Wanderers in Johannesburg. Though South Africa have already surpassed India's first-innings total of 202 runs, Thakur's five-wicket haul will help the visitors restrict the hosts on a moderate total to keep a strong grip on the Test match.