Italian Open: Djokovic, Nadal and Konta progress to semis, Osaka and Federer bow out with injury 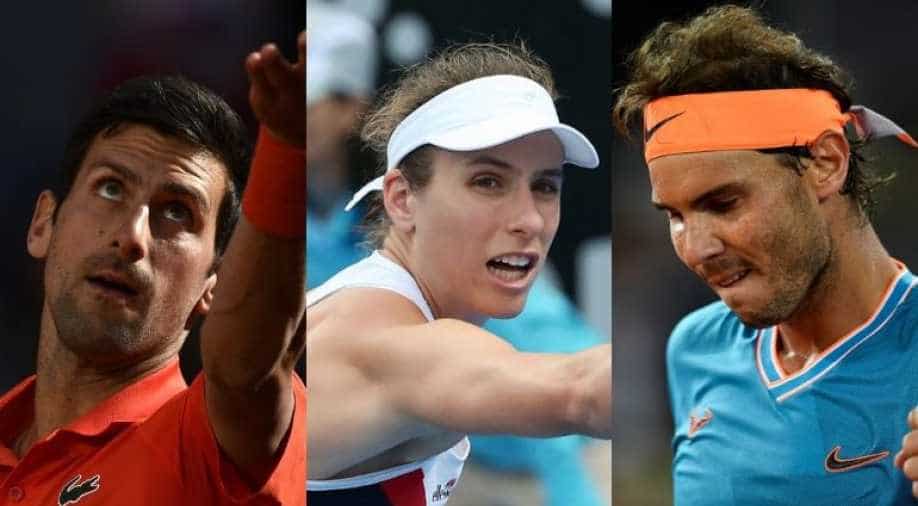 Nadal went 2-0 down against Verdasco before surviving three break points at 4-4 in the first set, but the second seed pulled away by winning eight consecutive games to continue his hunt for a ninth title in Rome

Novak Djokovic, Rafa Nadal and Johanna Konta progressed to the Italian Open semi-finals on Friday, but Roger Federer and Naomi Osaka were forced to withdraw with injury problems.

World number one Osaka pulled out of her quarter-final meeting with Kiki Bertens due to a thumb injury before 37-year-old Federer announced his withdrawal because of a problem to his right leg.

Djokovic beat Juan Martin del Potro 4-6, 7-6, (8-6), 6-4 in a three-hour thriller in the final match of the day to set up a semi-final with another Argentine Diego Schwartzman.

The world number one saved two match points in a second set tiebreak before edging to victory in the final set after a match that brought out some scintillating tennis from both players.

Defending Italian Open champion Nadal set up a semi-final with Stefanos Tsitsipas thanks to a 6-4, 6-0 win over fellow Spaniard Fernando Verdasco.

A week after losing to the Greek at the same stage of the Madrid Open, the 32-year-old Nadal will be eager to prove that defeat was just a blip as the Spaniard fine-tunes his game ahead of his bid for a 12th Roland Garros title.

Nadal went 2-0 down against Verdasco before surviving three break points at 4-4 in the first set, but the second seed pulled away by winning eight consecutive games to continue his hunt for a ninth title in Rome.

"I was not playing badly at the beginning at all but he was playing unbelievable (tennis)," Nadal told reporters.

"No mistakes, a lot of winners, taking the ball early. It was a very difficult first set. It was one of the first sets that I am happier with. I think I had a good feeling during the whole match. Then after winning that first set, in the second, of course, he slows down a little bit, but I was able to play a little bit more aggressive with the forehand'', Nadal said.

"I did a lot of things well. I am very happy to be in the semi-finals again. It's a good victory", he added.

In the women's draw, Konta booked her first semi-final in Rome with a 6-3, 3-6, 6-1 win over Czech Marketa Vondrousova.

The Briton, who defeated Americans Sloane Stephens and Venus Williams in her two matches on Thursday, will face sixth seed Bertens on Saturday after the Madrid Open champion progressed as a result of Osaka's withdrawal.

Konta, celebrating her 28th birthday, hit 42 winners against the 19-year-old Vondrousova and dominated the final set to clinch victory in one hour, 53 minutes.

She heads towards this month's French Open in fine form on clay, having finished runner-up in the Morocco Open at the start of May.

She will face Maria Sakkari in the other semi-final after the Greek defeated fellow qualifier Kristina Mladenovic 5-7, 6-3, 6-0.