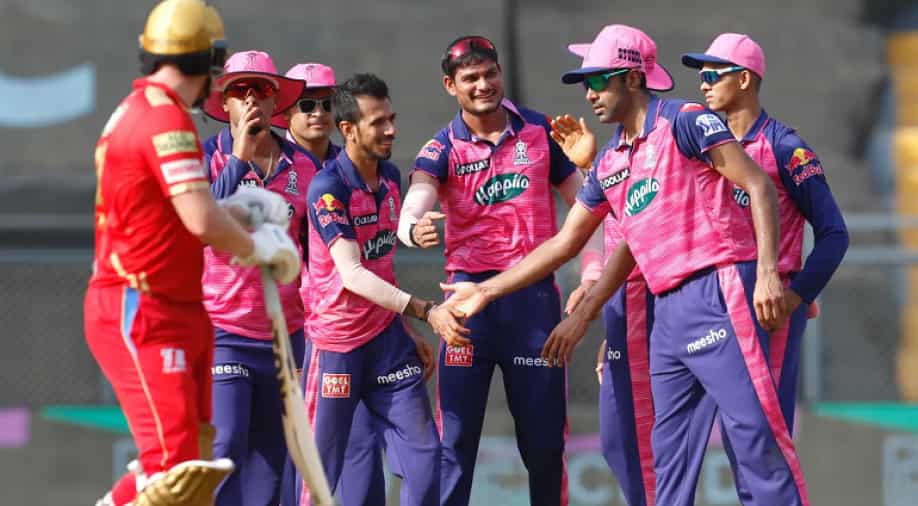 Opener Yashasvi Jaiswal marked his return to Rajasthan Royals` playing eleven with a scintillating 68 while Shimron Hetmyer exhibited his finishing exploits in an unbeaten 31 to help the side defeat Punjab Kings by six wickets at the Wankhede Stadium on Saturday.

After Jonny Bairstow`s 58 and Jitesh Sharma`s unbeaten 38 took Punjab to 189/5, Jaiswal shined in his comeback match of the tournament. Despite Devdutt Padikkal struggling to get going, Hetmyer ensured that Rajasthan chased down the total to successfully break their two-match losing streak and keep themselves in the hunt for a spot in the playoffs.

Jaiswal began by slamming two fours through cuts in the off-side and a glorious picked-up six over deep square leg. Jos Buttler joined the attacking party in the fourth over, launching Kagiso Rabada for a six over deep midwicket. He followed it up with three fours -- carving one through extra cover, a lap-pull over short fine leg while in air and smoked through cover. But Rabada had the last laugh, having an over-improvising Buttler caught at short third man.

Sanju Samson took over the attacking mantle after Buttler`s fall, finding luck in getting fours through edges twice while nailing other boundaries with sheer timing through point and cover. But his stay at the crease ended when he miscued to long-off off Rishi Dhawan.

Jaiswal, meanwhile, continued with his charge, heaving a four over Sandeep Sharma`s head and produced a stunning inside-out lofted six over extra cover off Rahul Chahar. Sharma came under from Jaiswal again when he carted back-to-back fours -- slapping over long-off and playing a silken late cut through third man.

Jaiswal reached his maiden fifty of the tournament in 33 balls. He then followed it up with three fours off Dhawan in the 13th over -- a smack over long-on, scoop flying over short third man and nailing drive past cover. After taking another four through reverse sweep off Chahar, Jaiswal tried to take over Arshdeep Singh but holed out to long-off, breaking the 56-run stand.

With 47 runs needed off the last five overs, Shimron Hetmyer clipped Rabada through fine leg and cracked successive boundaries in the arc between mid-wicket and long-on. Hetmyer and Padikkal took four and six respectively off Rabada to make the equation really easy for Rajasthan.

Arshdeep nailed his yorkers in a top-class 19th over and got Padikkal out with a low full toss chipped to cover. Hetmyer dispatched Chahar for a six over wide long-on and finished off the chase with a single in the same region to seal Rajasthan`s first win of the tournament in a chase.