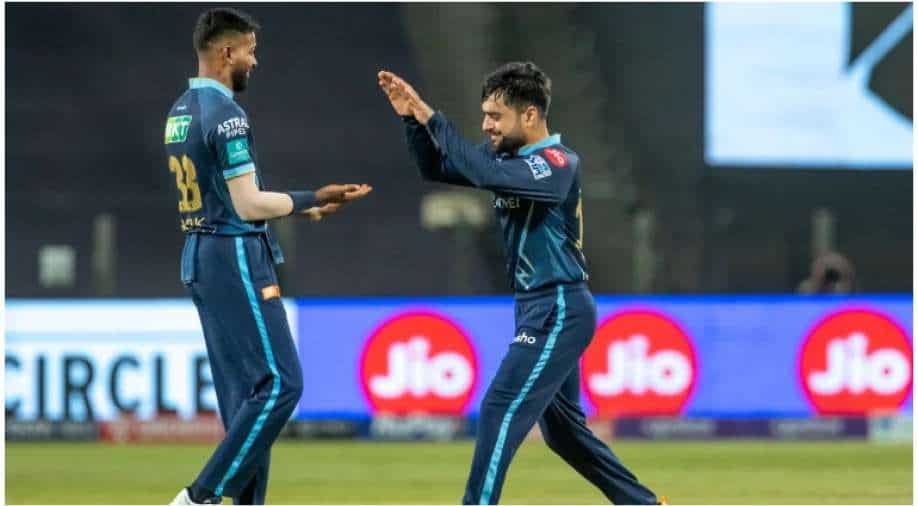 With his emphatic performance versus LSG, GT's vice-captain Rashid Khan joined Dwayne Bravo and Imran Tahir in the 450-wicket club in T20s.

Rashid Khan, at 23, is already one of the greats in white-ball formats. He has excelled in T20s with his wicket-taking abilities for Afghanistan and also while playing for several franchises in various leagues. During match 57 of IPL 2022, Rashid Khan created history by becoming only the third bowler to achieve 450 wickets in T20s.

Courtesy of Rashid's 4 for 24, his franchise Gujarat Titans (GT) beat Lucknow Super Giants (LSG) by a whopping 62-run margin in match 57 of IPL 15 on Tuesday evening (May 10) at the MCA Stadium, Pune. In defence of a moderate 144-4, Hardik Pandya-led Gujarat bowlers stood tall as Rashid wreaked havoc with the ball during Lucknow's run-chase whereas Sai Kishore's twin strikes also helped the new franchise to a win and become the first side in IPL 2022 to confirm a playoffs spot.

ALSO READ | GT vs LSG: Pacer Avesh Khan creates an IPL record for No. 11 with two sixes in a row off Rashid Khan

With his emphatic performance, where he removed the likes of Krunal Pandya, Deepak Hooda, Jason Holder and Avesh Khan, Rashid joined Dwayne Bravo and Imran Tahir in the 450-wicket club in T20s.

Most wickets in T20s:

What's staggering is that Rashid is only 23 and, hence, is sure to add plenty more wickets to his tally in the coming years. With his memorable performance versus Lucknow, Rashid also achieved two more impressive feats.

After taking Gujarat into the playoffs, vice-captain Rashid said at the post-match presentation, "Those couple of games which did not go well was all about my line and length. That was something I was missing in those games. The pace I bowl and action I have, I cannot afford to lose my line and length, it was about focusing on hitting the right area. The wicket was helping today with bounce and turn, but overall it was about bowling in the right areas. They (the pacers) have given us a platform where we can come and put the pressure. In a chase like 140-145 you need to have a good powerplay and the seamers gave us that. This is a very crucial part of the competition, it is all about the process whether we win or lose, we should keep the same process. We have to get better day by day and have to keep doing good things. Now the focus should be on playing good cricket and enjoying ourselves. I think Holder's wicket was crucial at that time and I had planned it, to bowl the leggie from middle stump."