GT vs LSG: Pacer Avesh Khan creates an IPL record for No. 11 with two sixes in a row off Rashid Khan 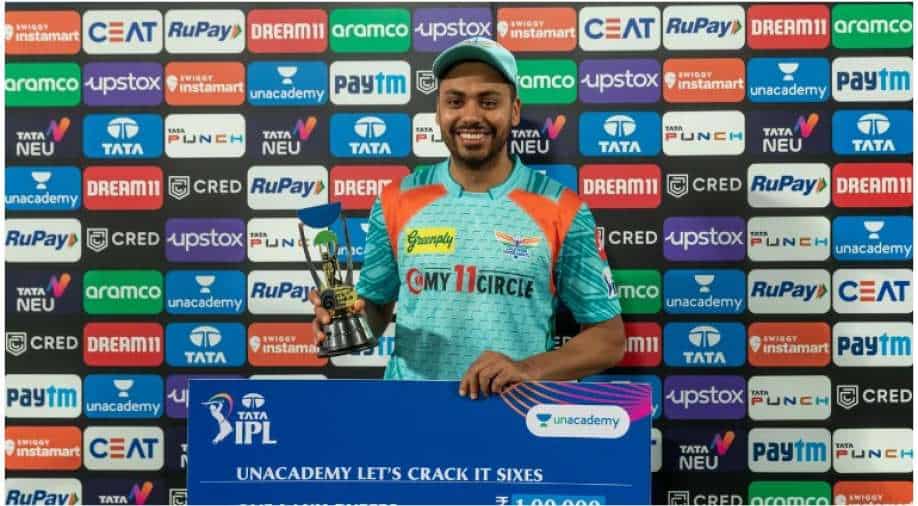 Avesh Khan creates an IPL record for No. 11 with two sixes in a row (Photo - IPL) Photograph:( Others )

GT vs LSG: Avesh Khan had a memorable day as he created an IPL record for No. 11 with two sixes in a row off Gujarat's Rashid Khan.

Gujarat Titans (GT) and Lucknow Super Giants (LSG) locked horns with each other in match 57 of IPL 2022 edition, on Tuesday evening (May 10) at the MCA Stadium, Pune. In what was a battle between the top-two sides, the winner was set to become the first team in IPL 2022 to qualify for the playoffs. In a low-scoring affair, Hardik Pandya-led Gujarat beat KL Rahul's Lucknow by 62 runs, in defence of 144-4, to get to 18 points and make it to the playoffs.

Opting to bat first, Hardik & Co. struggled for runs on a tricky surface as Shubman Gill's 49-ball 63 propelled Gujarat to 144-4, along with some contributions from David Miller and Rahul Tewatia. In reply, Rashid Khan's 4 for 24 and Sai Kishore's twin strikes dented Lucknow in pursuit of 145 as they were bundled out for a paltry 82 in 13.5 overs.

As it was a long-scoring affair, the batters didn't manage plenty of big hits. As many as only four sixes were hit in the match, with two successive ones from No. 11 Lucknow batter Avesh Khan (off Rashid). In this process, pacer Avesh also created a new IPL record for the No. 11 batter. He became the first-ever No. 11 batter to hit multiple sixes in an IPL innings.

While Lucknow struggled to confirm their place in the playoffs with a win over Gujarat, Avesh still had a decent outing with 4-0-26-2 and 12 runs off four deliveries, striking at 300. He will now be desperate to shine in Lucknow's remaining two fixtures and take them to the playoffs. The Rahul-led franchise next face Rajasthan Royals (RR) on Sunday evening (May 15) at Brabourne Stadium, Mumbai.