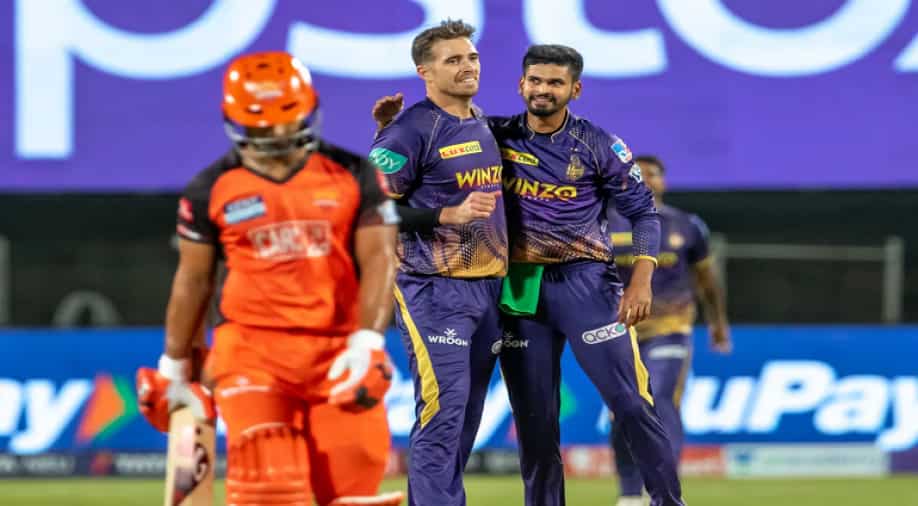 Andre Russell's all-round brilliance theoretically kept Kolkata Knight Riders in contention for a play-off berth as they recorded a comprehensive 54- run victory over Sunrisers Hyderabad in a must-win IPL game on Saturday.

In reply, SRH were never in the hunt as they huffed and puffed their way to 123 for 8 against a collective bowling effort from Shreyas Iyer's men with the flamboyant Jamaican finishing with best figures of 3 for 22.

With Rajasthan Royals (14 from 12) and RCB (14 from 13 games) having chance to move up, even a victory is unlikely to be enough for Shah Rukh Khan owned franchise which played its 13th 'first XI' combination in as many games.

For Sunrisers, 10 points from 12 games with a dismal NRR of -0.270 means that even two big wins and 14 points might not be enough after five straight defeats.

While he is a sentimental favourite among Indian cricket lovers, a lot of SRH's poor batting show could be attributed to skipper Kane Williamson's nightmarish season that has yielded only 208 runs in 12 games at an average of less than 19 and a strike-rate of 92.85.

Williamson (9 off 17 balls) has been SRH's weakest link this season and his failure at the top of the order has been one of the biggest reasons for their slump.

It was an ordeal for Williamson till Russell bowled one on the stumps to end his misery. Rahul Tripathi (9 off 1 balls) also looked scratchy even as Abhishek Sharma (43 off 28 balls) attacked Sunil Narine, hitting him for two sixes.

At the halfway stage, SRH weren't in a very comfortable position at 66 for two and even the statistic of teams chasing (highest successful chase of 170) at the Gahunje Stadium didn't paint an altogether rosy picture.

Once Abhishek was dismissed by Varun Chakaravarthy (1/25) and Narine took a fine return catch to dismiss SRH's big hope Nicholas Pooran (2), there wasn't much resistance from the rest of the batters.

Earlier, Umran Malik was back in his groove after a few forgettable outings as he ran through KKR's top-order but Russell along with Sam Billings (34 off 29 balls) added 63 runs for the sixth wicket to give the total a semblance of respectability after KKR were in trouble at 94 for 5.

KKR added 58 runs in the last five overs, mainly due to Russell as he hit three sixes off three full-tosses bowled by off-break bowler Washington Sundar (0/40 in 4 overs).

He did get good support from T Natarajan (1/43), who nailed the block-hole deliveries with perfection, getting rid of Rinku Singh (5).

Venkatesh Iyer's "second season blues" continued as he chopped one from Marco Jansen (1/30 in 4 overs) onto the stumps.

As far as Rahane is concerned, he has well past his IPL sell-by date and even three sixes couldn't hide the fact that he played a lot of dot balls and once he started cramping, it became even more difficult to rotate the strike.

Finally he was out when he slashed hard at a wide rising delivery and Shashank Singh at sweeper cover fence maintained perfect body balance in a side on position to latch on to the catch.

Russell and Billings then took the attack back to the opposition camp with some big blows after initial period of struggle.