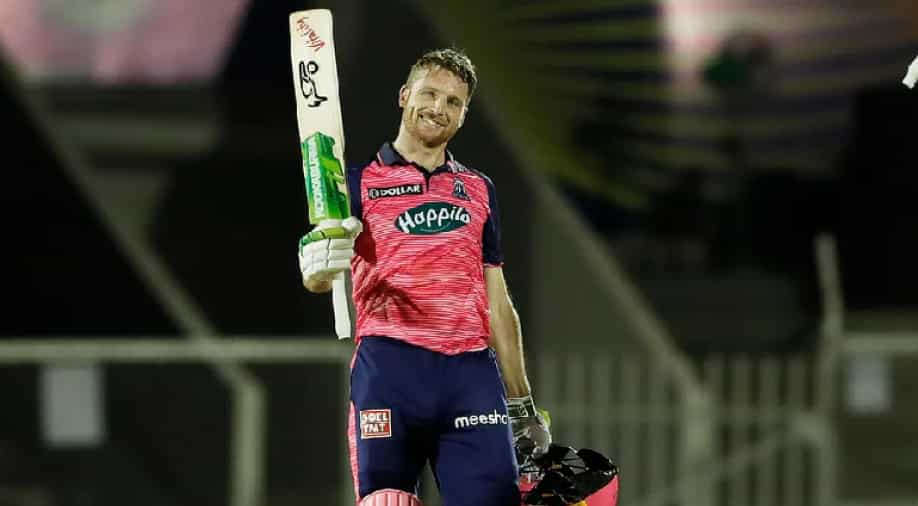 Rajasthan Royals opener Jos Buttler continued his purple patch in his side's clash against KKR in IPL 2022 on Sunday. Buttler notched up his second century of the season to equal AB de Villiers' record.

Rajasthan Royals (RR) Jos Buttler continued his dream run with the willow in his side's clash against Kolkata Knight Riders (KKR) in the ongoing Indian Premier League (IPL) 2022 on Monday. Buttler notched up his second century of the season as he slammed a brilliant knock of 103 runs off 61 balls against the Shreyas Iyer-led side.

Asked to bat first in the game, RR openers Buttler and Devdutt Padikkal got their side off to a flying start. The duo added 97 runs for the first wicket as Buttler went after the KKR bowlers right from the start of his innings. The Englishman looked in brilliant touch as he played some sensational strokes all across the ground.

After adding 97 runs for the first wicket with Paddikkal (24), Buttler joined forces with skipper Sanju Samson in the middle and continue taking the KKR bowlers to the cleaners. The RR opener added 67 runs for the second wicket with Samson before completing his hundred with a huge six off Pat Cummins' bowling.

Buttler's 103-run-knock was laced with nine fours and five sixes as it saw him equal the legendary AB de Villiers' record. Buttler joined AB in becoming the overseas batter with the third-highest number of centuries in IPL history. Universe Boss Chris Gayle tops the elite list with a stunning six centuries in IPL.

Most Centuries by an overseas player in IPL:

Buttler's fabulous knock along with quickfire cameos from Samson (38) and Shimron Hetmyer (26) helped Rajasthan Royals post a huge total of 217 runs on the board against KKR. RR have now posted the highest total by any team so far this season and will be backing themselves to come out on top against Iyer & Co. at the Brabourne Stadium.

With his century, Buttler has also become the leading run-getter of the IPL 2022 so far and is the current owner of the Orange Cap with 375 runs in six matches o far this season at an average of 75 and a strike rate of over 156. He is the first player to have breached the 300-run mark this season.