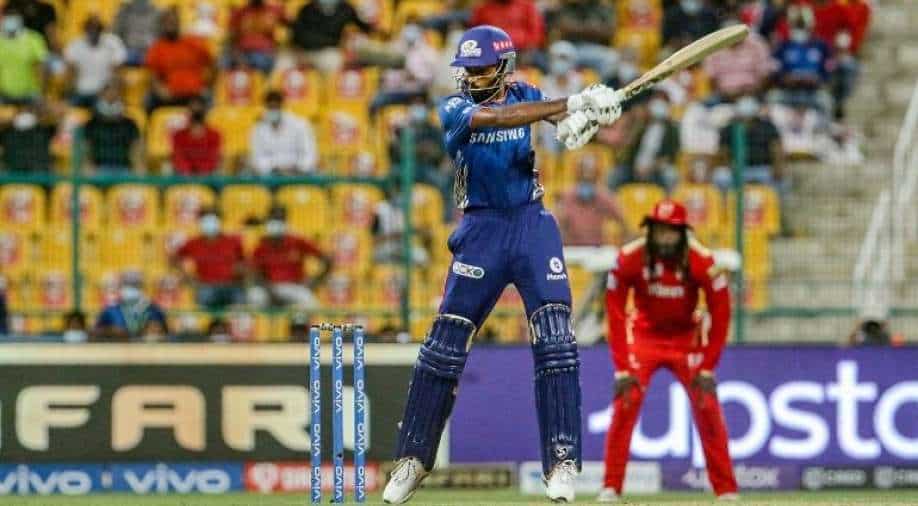 Hardik Pandya, who hasn't bowled from long due to back surgery, is optimistic about bowling soon

Mumbai Indians' star all-rounder Hardik Pandya on Saturday broke his silence on when he would start bowling again. The all-rounder gave an optimistic update on his return ahead of the Indian Premier League (IPL) match against Delhi Capitals at Sharjah Cricket Stadium in Sharjah on Saturday.

Hardik returned to cricket after a long break due to back surgery, during last year's IPL, Mumbai Indians tried to manage his workload also. During a conversation with Star Sports before MI's match against Delhi Capitals, Pandya said, "Runs are important and especially when your team wins. It was important for my personal confidence but to score for the team was important. We have to assess the wicket and adapt on the given time."

He added, "The plans have to be simple and win over obstacles ball-by-ball. There's no option, but one thing is that these situations bring out the best in you. We realise it is a do-or-die game, but we are just focusing on the controllabes."

Answering the question about bowling, Pandya said in Hindi, which is translated in English as: "I will bowl soon. Efforts are on." In a pre-match press conference on Friday, Mumbai Indians coach Mahela Jayawardene seemed apprehensive of him bowling sooner and said, "Hardik might struggle with the bat if he pushes too hard to bowl in the ongoing IPL. Notably, ever since Hardik underwent back surgery, he has not been bowling regularly."

"Because he hasn't bowled since Sri Lanka, I think what we are trying to do is what's best for Hardik going forward. We are talking to Indian management, and make sure sooner he feels comfortable, we get him into his bowling programme and prepare him," Jayawardene further said.

Also read: MS Dhoni knows Suresh Raina isn't performing well but he wouldn't replace him with someone else: Virender Sehwag

Pandya has not been given the ball in MI's first 11 games. He has also not been able to perform with the bat as per his standards. He has only scored 95 runs in 11 matches, 40 of them coming in the last match against Punjab Kings.

In their previous games, the Delhi Capitals had lost to the Kolkata Knight Riders (KKR), while the Mumbai Indians had defeated the Punjab Kings.

The Delhi Capitals, captained by Rishabh Pant, is at second position in the points table, while the Mumbai Indians are at sixth place.