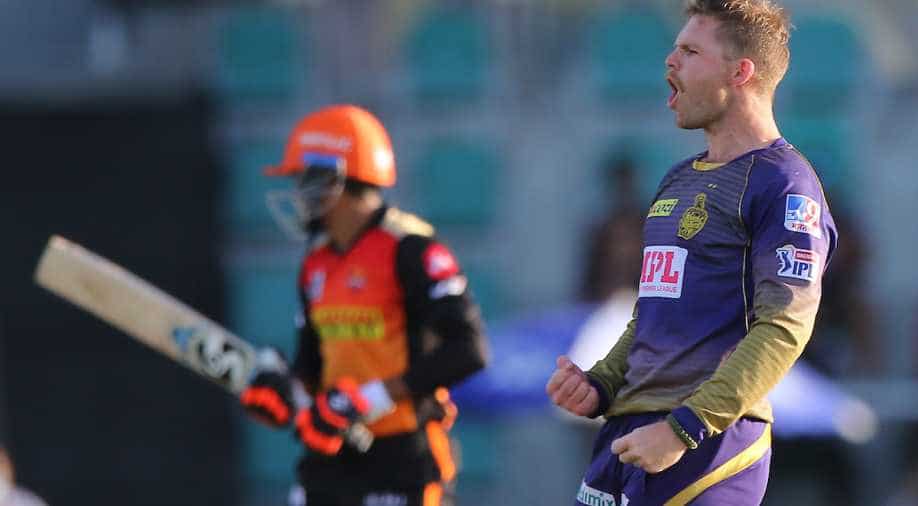 The Kiwi speedster, Lockie Ferguson, scalped the big wickets of Kane Williamson, Manish Pandey and Priyam Garg to bring KKR back into the match while sealing the deal with a terrific Super Over for KKR in IPL 2020.

Lockie Ferguson was the star for Kolkata Knight Riders as the Eoin Morgan-led outfit overcame a Super Over scare against Sunrisers Hyderabad at the Sheikh Zayed Stadium in Abu Dhabi. Ferguson, playing his first match in Indian Premier League (IPL) picked up three wickets in his four-over quota before coming back and dismissing both David Warner and Abdul Samad in the Super Over while restricting SRH for just two runs.

The Kiwi speedster scalped the big wickets of Kane Williamson, Manish Pandey and Priyam Garg to bring KKR back into the match while sealing the deal with a terrific Super Over.

After the match, Ferguson said that dismissing Warner at the start of Super Over was his favourite dismissal of the day. He further hailed skipper Eoin Morgan to keep his calm while adding he decided to go with what he did throughout the game.

“I think getting David Warner out especially at the start of the super over [was my favourite wicket]. It's great having Morgs at the top off the mark with his calmness and of course I had my plan which was working throughout the game. Look we'll take this win and enjoy tonight, it was a very good win on a tough wicket. It was nice to put the icing on the cake after the batsmen's effort,” Ferguson said after collecting the Man of the Match award.

KKR, batting first, posted 163/5 in 20 overs after late blitz from Dinesh Karthik and Eoin Morgan. While SRH struggled to get those runs coming, David Warner smashed three boundaries in the final over off Andre Russell to take the match to the Super Over.

With the win, KKR now have 10 points to their name while SRH are still stuck with six points under their belt.