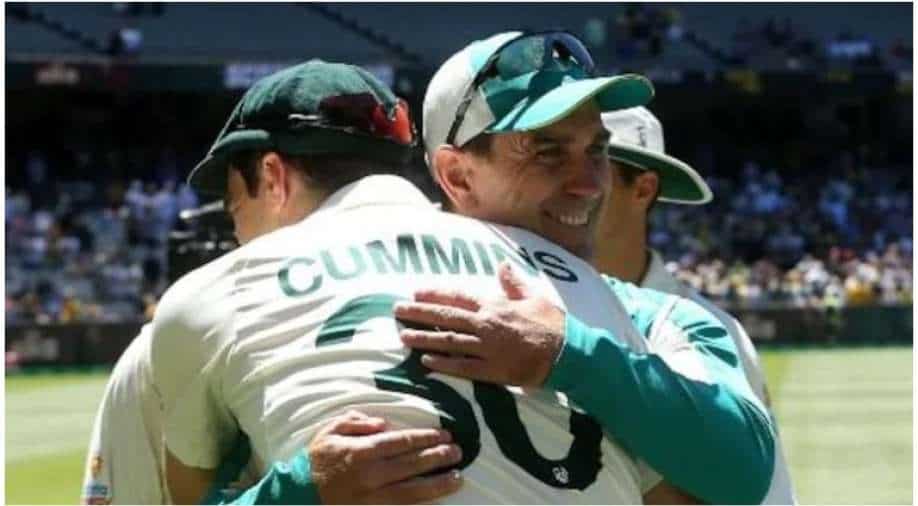 Former Aussie opener Justin Langer recently stepped down as the national side's head coach as Test captain Pat Cumins has opened up on the former's resignation. Here's what he said:

Justin Langer, on February 5, stepped down as the Australian team's head coach. Langer succeeded his former teammate Darren Lehmann at the top post in early 2018, following the spot-fixing scandal which rocked the Australian cricket. Since then, he did a remarkable job in once again lifting the national side and leading them to a 4-0 Ashes win, recently at home, and a maiden T20 World Cup title.

However, a lot has been said and written regarding Langer's method of coaching, which didn't go down nicely amongst the national players. "Justin was offered a short-term extension to his current contract, which sadly he has opted not to accept," stated an official Cricket Australia release.

Following Langer's exit, former Aussie pacer Mitchell Johnson lashed out at Test captain Pat Cummins and called him 'gutless'. Johnson feels that Cummins had an agenda of his own to bring down his national coach. Thus, Cummins recently opened up on Langer's exit and the criticism received while talking to reporters on Wednesday (February 8). He said, "I think he (Langer) tweaked and changed quite a bit. He deserves a lot of credit for that. I think the question then became do we think that it's sustainable. We thought it is the right time to make a change. I think some of these skill sets are perhaps a little bit different to perhaps his traditional coaching style."

"I think he tweaked his coaching style in the last six months and did a really good job, but we think now is the right time for a different direction. It's a matter of opinion but we think it's the right one. I don't think he should be surprised though, it's been two years of evaluation. I don't think there's any big surprise," he added.

On Johnson's comments, Cummins asserted, "Mitchell Johnson is just standing up for his mates. I absolutely disagree with what he said. No, he hasn't reached out, but that's fine. He's entitled to his opinion, he's standing up for his mate. I can hold my head high so I'm fine. I actually haven't really had much of it (personal criticism) before, so it's actually been good to get it out of the way early in the captaincy."

"I knew when I took on the job it's gonna come with added scrutiny. The last week's been good ... I'll cop it, but I'm absolutely fine with it. I know a lot of it's come from the right place. We all want to do what's best for Australian cricket. There's been a lot of emotion flying around. Added to the feedback, you've got to take everything in that kind of context. They're all people I really respect so I listen to them for sure. I'd welcome chatting to any of them directly about feedback and thoughts they have."

Langer was offered a contract extension, which was the result of a thorough review process that evaluated many factors -- future requirements of the national side as well as the upcoming extensive schedule of fixtures. For the unversed, the contract extension was approved by Cricket Australia (CA) and presented before Justin, which he didn't accept.

It will be interesting to see who takes the top job and succeeds Langer as the Aussie head coach in the coming days.