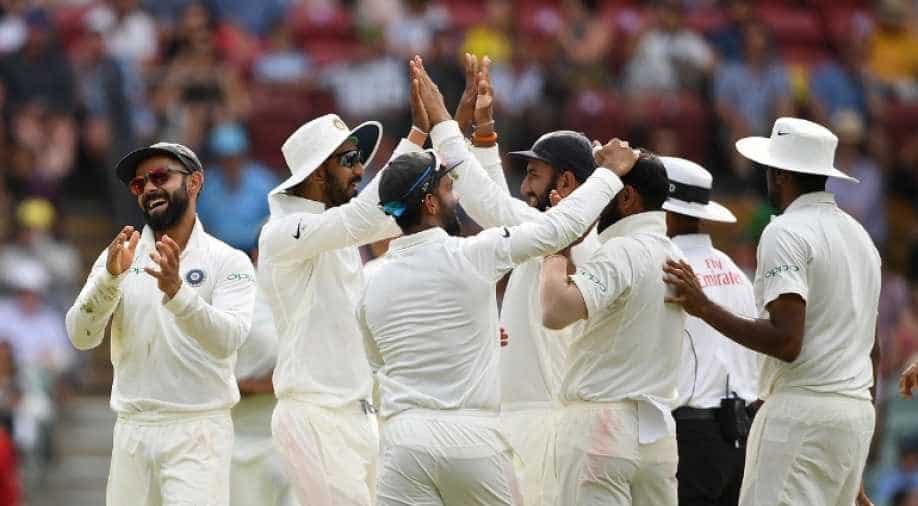 Spinner Ravichandran Ashwin and paceman Mohammed Shami combined to tear through Australia's top order and bring India within six wickets of victory in the series-opening Test on Sunday.

Since the second World War, no team has bettered West Indies' 239 for five to defeat Australia by five wickets in 1982.

Having bowled India out for 307 after lunch, with spinner Nathan Lyon taking six wickets, Australia's openers proceeded to 28 without loss before Ashwin broke through.

The spinner dismissed Aaron Finch in bizarre circumstances, the opener given out caught for 11 after a fuller delivery pitched, pinged off his pad and whistled by his glove.

Finch conferred with fellow opener Marcus Harris then declined to review the decision, trudging off as the technology showed no clear evidence that he had gloved the ball.

Harris, on 14, flashed his bat at Shami's fifth ball after tea and nicked behind to the slips where a diving Cheteshwar Pujara put a difficult chance down.

The debutant was eventually out for a second successive 26, edging through to wicketkeeper Rishabh Pant with another aggressive swipe at Shami.

Pinned down by Ashwin, Khawaja tried to break the shackles with aggression but skied a catch to Rohit Sharma in the deep to fall for a scratchy eight from 42 balls.

Handscomb was given a life on 13, a half-chance put down by Lokesh Rahul in close after he smashed Ashwin hard into the fielder's hands.

He squandered the reprieve, adding only one run before lobbing a miscued pull to Pujara at midwicket, with Shami making the breakthrough.

India's celebrations were tempered moments later when fast bowler Jasprit Bumrah hurt his left shoulder while fielding and promptly exited the ground with the team physio.

Marsh rode his luck, all but chopping Shami onto his stumps with 10 overs to play.

Australia will hope the number four can bring his Sheffield Shield form on day five, having scored an unbeaten 163 as Western Australia chased down 313 in the fourth innings to beat South Australia in the most recent match at the venue.

India had earlier blown a chance to bat Australia out of the match with a quick and shambolic collapse after lunch.

Having resumed on 260 for five in complete control, the tourists lost their last four wickets for four runs in a panicky bout of tail-end slogging.

Hard-hitting wicketkeeper Pant was out for 28 blasting Lyon into the deep, before Ashwin pulled Mitchell Starc straight to Harris at deep backward point to fall for five.

Having compiled a patient 70, Ajinkya Rahane caught his teammates' disease and reverse-swept Lyon straight to Starc.

The offspinner claimed tailender Shami for a duck the next ball to finish with 6-122, having dismissed Pujara for 71 before lunch and Kohli (34) late on day three.

Starc (3-40) wrapped up India's innings with a short ball removing Ishant for a duck.