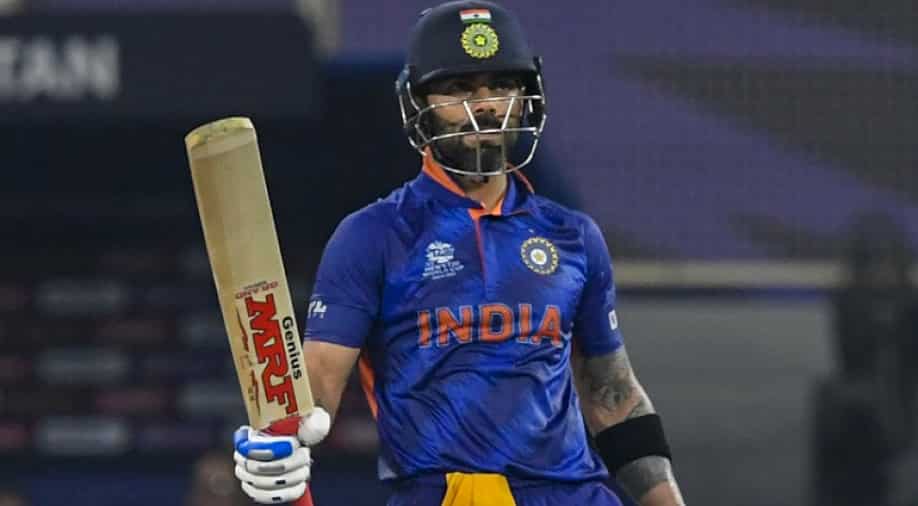 Virat Kohli is on the verge of breaking Martin Guptill's world record in T20Is. Photograph:( AFP )

Virat Kohli will be aiming to break Martin Guptill's elite record in T20Is when he takes the field in the upcoming T20I series between India and West Indies.

Indian batting maestro Virat Kohli will be aiming to break Martin Guptill's record of most runs in T20Is when he takes the field against West Indies in the upcoming three-match series between the two sides. Kohli is currently the second-highest run-getter of all time in T20Is and is just 73 runs away from surpassing Guptill on the elite list of highest run-getters in T20Is.

After beating West Indies 3-0 in the recently-concluded ODI series, India will lock horns with the visitors in a three-match T20I series beginning from Wednesday (February 15). The three T20Is will be played at the Eden Gardens in Kolkata. All eyes will be on Kohli, who will be hoping to bounce back to form after a woeful performance in the ODIs.

Kohli had managed only 26 runs in three ODIs against West Indies in what was his worst ODI series as a batsman in nine years. The former India skipper will be looking to shut down his critics and get back among the runs in T20Is. Kohli presently has 3227 runs in T20is while Guptill is on the top of the list of highest run-getters in T20is with 3299 runs in the shortest format.

India captain Rohit Sharma is not too far behind from the duo as he has so far amassed 3197 runs in T20Is and needs 103 runs to overtake Guptill and become the highest run-getter in the shortest format. Rohit is followed by Australian skipper Aaron Finch and Ireland's Paul Stirling at the 4th and 5th spot respectively.

On Tuesday, Indian skipper Rohit came out in staunch defense of Kohli amidst his poor form with the bat and urged the media to leave the ex-India captain alone. Rohit said Kohli is an experienced cricketer and knows how to deal with pressure situations.

"If you guys can keep quiet for a while, I think he'll be alright," Rohit told the reporters at the press conference ahead of the 1st T20I.

"He (Kohli) is in a great mental space. He has been a part of this team for more than a decade. Such a player knows how to handle the environment and pressure. If you guys can keep it quiet for a bit, everything will fall in place," he added.