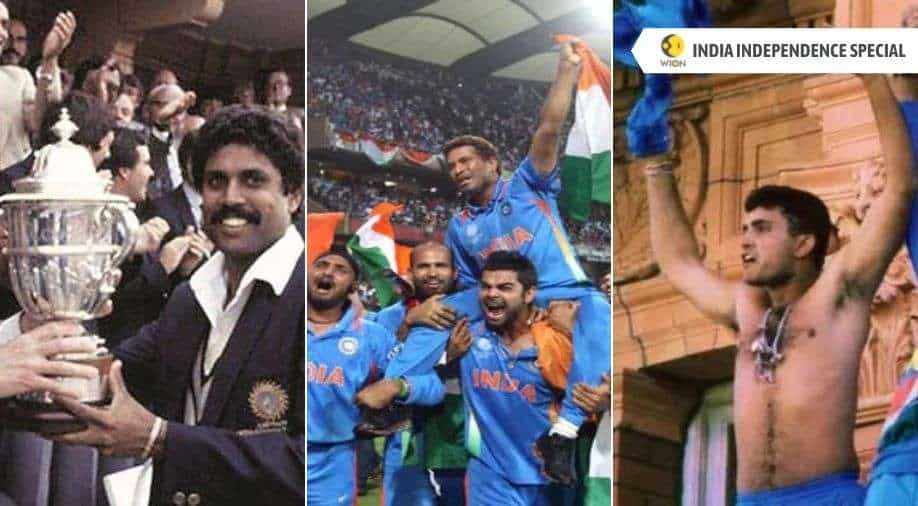 Here are some of the iconic moments in the history on Indian cricket post Independence. Which one is your's?

What's the first memory you get when you hear the word cricket?

Or those outrageous cover drives by Sachin Tendulkar?

Most Indians also have some priceless memories of playing 'gully cricket' in alleyways during their childhoods.

Because when it comes to cricket in India, it's not just a sport, it's an emotion, a religion.

A game which originated in England and was brought to the subcontinent by the East India Company, cricket ended up as a sport that unifies the nation.

A game, in which India has better records than the English with multiple ICC trophies.

Not just one, there are several high points in the history of Indian cricket, here's a look at some of the most monumental ones in post-Independence India:

When Indian won the 1983 World Cup and captain Kapil Dev lifted the trophy, it gave thousands of youngsters a reason to follow and play the sport.

It is regarded as the landmark moment in the history of the sport as it was the beginning of the craze that the nation experiences till today.

India was playing in their first final of the World Cup and defied all the odds to defeat a prolific West Indies in 1983 under the leadership of Kapil Dev.

The ardent cricket lovers in India remember that sensational boundary that Hrishikesh Kanitkar hit when India needed three runs to win from just two balls against their arch-rival Pakistan during the Silver Jubilee Independence Cup final in Dhaka on January 18, 1998.

Pakistan's ace Saqlain Mushtaq was bowling, and a win for India was looking rather difficult at that moment, but thanks to that outrageous boundary, India successfully chased the total of 314/5 in a nail-biter, making Kanitkar an overnight hero.

The match is considered one of the best clashes between India and Pakistan — fierce cricketing rivals.

IN PICS | India Independence - From Olympics to Cricket: When 'free India' shined in the world of Sports

The Silver Jubilee Independence Cup tournament was held as a celebration of 25 years of Bangladesh's independence.

Besides the host Bangladesh, India and Pakistan were other participants. India won the tournament after defeating Pakistan in the third final of the best of three finals.

Remember when Sourav Ganguly took off his shirt to celebrate India's win against England? It was 2002 when former India captain Ganguly's iconic celebration at Lord's balcony went viral and still is considered one of the most famous incidents in the history of Indian cricket, so as the match was.

The 2002 NatWest Series was a One Day International cricket tri-series between England, India and Sri Lanka. The final was played between India and England.

During the match, India chased down a total of 326 in the NatWest final, however, the chase was not easy as India were reduced to 146 for 5 at one stage.

Ganguly (60) and Virender Sehwag (45) gave a good start to the team but Dinesh Mongia, Sachin Tendulkar and Rahul Dravid lost their wickets in quick secession.

Yuvraj Singh scored some crucial runs with Mohammed Kaif and put up a 121-run partnership for the sixth wicket before losing his wicket.

Kaif, who remained unbeaten by scoring 87, kept the fight on and Zaheer Khan hit the winning runs to seal and the first ODI series win in England for India in a historic run chase.

India emerged victorious in the maiden ICC T20 World Cup in South Africa — another landmark win in the history of Indian cricket.

A bunch of youngsters under the leadership of MS Dhoni defied all the odds, beating their arch-rival Pakistan in the final clash.

The thrilling final moments of the match are still fresh when India managed a hard-fought win.

Dhoni gave the final over to pacer Joginder Sharma and Misbah-ul-Haq was batting, Pakistan needed 13 runs to win, with one wicket remaining.

Joginder first delivery was a wide that he bowled again and gave no run. Misbah hit a sixer on the second ball taking the match down the wire. With 6 runs away from the target, Misbah went for a scoop, handing a simple catch to S Sreesanth.

Watch the final over here:

Under the leadership of MS Dhoni, India won the tournament after defeating Sri Lanka in the final at Wankhede Stadium in Mumbai.

The win was significant for India and legendary cricketer Sachin Tendulkar, who finally won a cup after an outstanding cricketing career.

Kohli even claimed that that victory was one of the milestones of his career after he led his side to a 2-1 series win over the Aussies.

Which one is your favourite? Or you have to add another to this list?