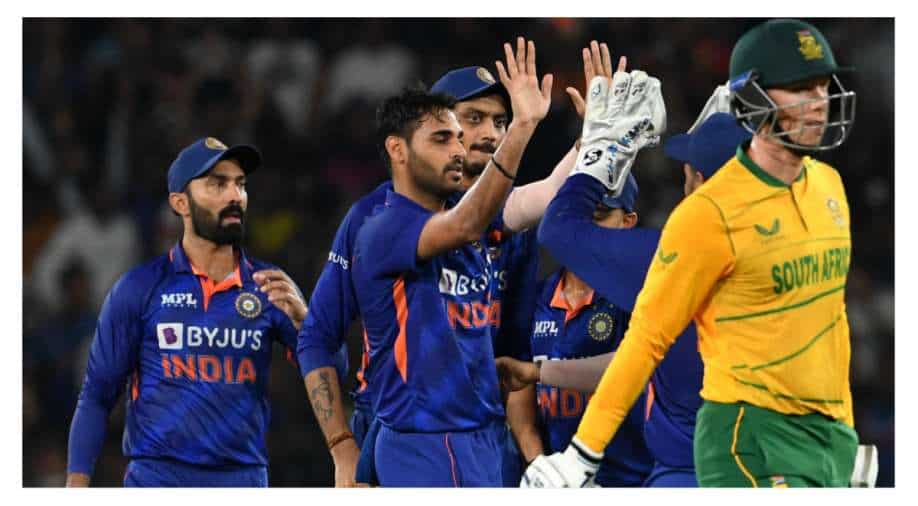 IND vs SA prediction: Who will win 4th T20I between India and South Africa Photograph:( AFP )

India will host South Africa in the fourth and penultimate T20I in Rajkot on Friday evening. Here's the match prediction:

India kept the five-match T20I series alive with a convincing 48-run win over visitors Temba Bavuma-led South Africa in Visakhapatnam on Tuesday (June 14). On Friday evening (June 17), both sides will square off against each other once again in the fourth and penultimate match of the series at the Saurashtra Cricket Association, Rajkot.

Talking about the third match, Rishabh Pant-led India once again lost the coin toss and were asked to bat first. Riding on half-centuries from Ruturaj Gaikwad and Ishan Kishan, India were on course for a total beyond the 200-run mark before South African bowlers bounced back. Hardik Pandya's unbeaten 31 propelled India to 179-5. In reply, Yuzvendra Chahal's 3 for 20 and Harshal Patel's four-fer dismissed SA for 131 all-out.

Will rain play spoilsport in the fourth and penultimate tie?

Match prediction for the fourth T20I: The venue has seen big as well as moderate totals being chased or defended. Hence, there is something for both batters and bowlers. Expect a high-scoring affair with India likely to remain unchanged whereas SA can include Quinton de Kock, if fit, for Reeze Hendricks.