Ind vs SA, 1st Test: Dravid gives a pat on Pujara's back to uplift his spirits after golden duck - WATCH 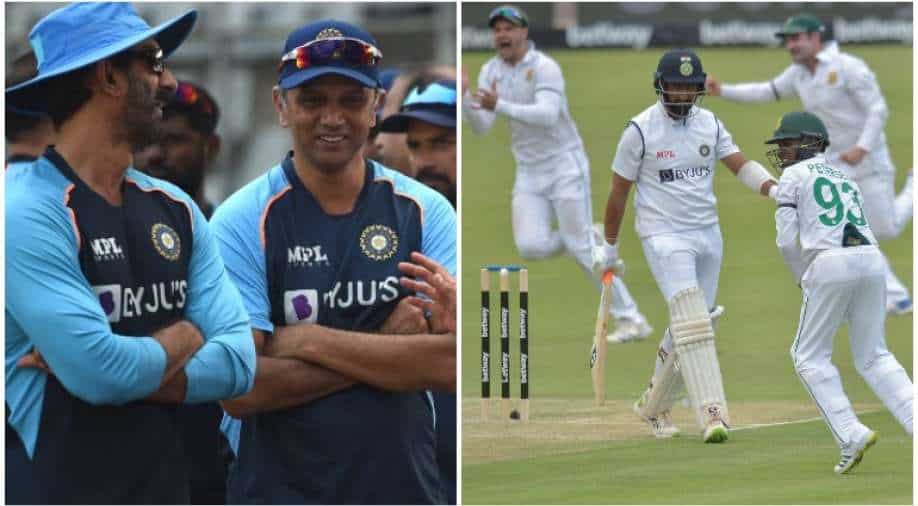 Cheteshwar Pujara fell for a first-ball duck on Day 1 of the opening Test between India and South Africa in Centurion. Head coach Rahul Dravid lifted his spirits with a heartwarming gesture:

Cheteshwar Pujara hasn't scored an international ton since early 2019. While the right-hander continues to be an integral part of India's Test line-up and has played some important knocks in the recent past, a three-figure knock continues to evade the red-ball specialist.

On Day 1 of the first Test between India and South Africa, in Centurion, Pujara came out to bat with India off to a fine start courtesy openers KL Rahul and Mayank Agarwal. Coming out to bat with India 117/1 after winning the toss, Pujara was expected to take the scoreboard forward and bat throughout the day; tiring the bowlers. However, he fell for a golden duck.

Pujara tried to negate a Lungi Ngidi delivery but got an inside edge and was caught by the short-leg fielder as he walked back to the pavillion for a golden duck. Thus, the right-hander felt dejected as his run of form remains below his own standards. Nonetheless, head coach Rahul Dravid came to his rescue and lifted his spirits in the dressing room.

During the third-wicket stand between Indian captain Virat Kohli and opener KL Rahul, Dravid went past Pujara and gave him a gentle pat on his back which brought a smile on the current No. 3 batter. Here's the video of the same shared on social media platform Twitter:

Talking about Day of the Centurion Test, Kohli-led India ended the day's play on top. After the 117-run opening stand between Rahul and Mayank (60), India slipped to 117-2 but an 82-run third-wicket partnership between Kohli-Rahul and unbeaten fourth-wicket stand between Ajinkya Rahane-Rahul (122 not out) took India to 272-3 at stumps.

Day 2 of the first Test has not started yet due to relentless rain showers. Kohli-led India will look to surpass the 400-run mark and pile up a big score when play resumes after the rain break. Dean Elgar-led South Africa will hope to get rid of the rest of the Indian batters in a flash and comeback into the contest.