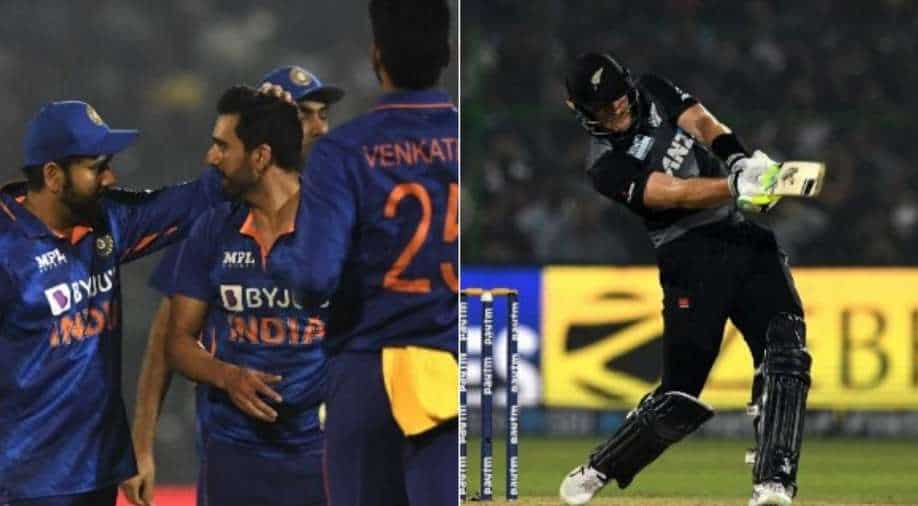 Rohit Sharma-led Team India registered a stunning five-wicket win against New Zealand in the first T20I of three-match series on Wednesday (November 17) at the Sawai Mansingh Stadium in Jaipur. After the win, India now lead the series 1-0.

During the match, India won the toss and invited New Zealand to bat first, as Martin Guptill (70 off 42) and Mark Chapman (63 off 50) helped New Zealand to post 164-6 in 20 overs. Guptill who was looking dangerous in the middle smashed a wonderful no-look 98 metre six to Deepak Chahar in the first ball of 18th over.

Guptill didn't even look at the ball which went for a maximum instead he was staring at Chahar and the bowler didn't even dare to give him a stare and went for the second delivery. The incident has grabbed attention, watch it here:

With Guptill set, Black Caps were eyeing a big total but Chahar dismissed the attacking opener in the 18th over. Bhuvneshwar Kumar (2/24) and Ravichandran Ashwin (2/23) were the main wicket-takers for India.

In reply, Suryakumar Yadav's fine fifty (62 off 40) and Rohit's important knock (48 off 36) helped India chase the target in the last over of their innings. Rishabh Pant, who hit the winning runs, scored 17 off 17 balls.

After the match, Rohit hailed the team for playing brilliantly under pressure, as he said, "Towards the end we saw it wasn't easy, was a great learning for the guys because those guys haven't batted in that situation before for India."

"It was great learning for them to understand what needs to be done, it's not about power-hitting all the time and you try and put the ball to the left or right of the fielder and try and take singles or find boundaries. As a team, we are happy that those guys got to bat in that situation and finished the game off."