Goalkeeper to goalscorer as Alisson rescues Liverpool, Tottenham up to sixth 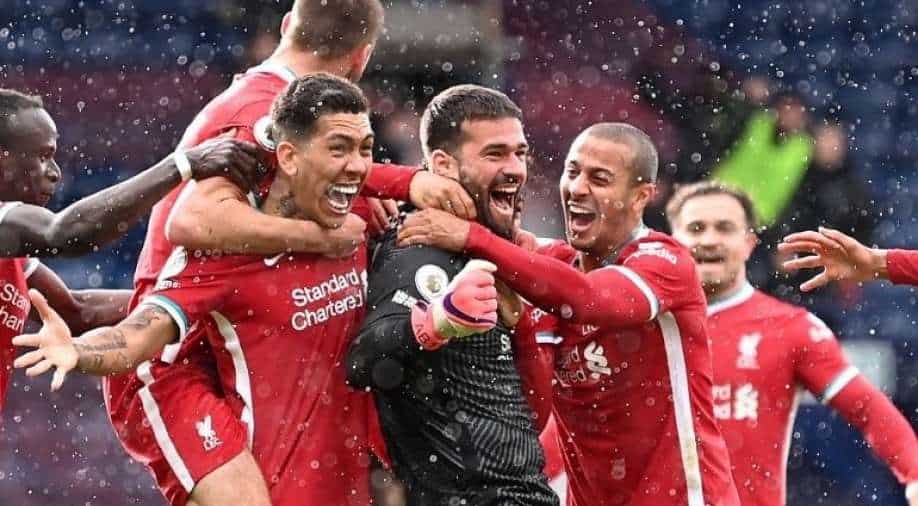 Jurgen Klopp's men trail fourth-placed Chelsea by one point and Leicester by three, with two league games left to play.

Tottenham were more comfortable 2-0 winners over Wolves to move into pole position for a place in the Europa League, but Everton's hopes of European football were dealt a massive blow by Sheffield United's shock 1-0 victory at Goodison Park.

Alisson's perfectly executed header keeps Liverpool's top-four fate in their own hands despite sitting fifth in the table.

Jurgen Klopp's men trail fourth-placed Chelsea by one point and Leicester by three, with two league games left to play.

But with Leicester and Chelsea still to face off in a repeat of the FA Cup final, which the Foxes won 1-0 on Saturday, victories over Burnley and Crystal Palace will take Liverpool into the top four.

The already-relegated Baggies took an early lead through Hal Robson-Kanu before the in-form Mohamed Salah equalised before half-time.

'God put his hand on my head'

But Liverpool were still heading for a damaging draw when Alisson headed in from a corner in the fifth minute of stoppage-time.

The Brazilian's father died in February when he drowned in a swimming accident.

Alisson could not even return home for the funeral at the time due to quarantine rules on foreign travel and was visibly emotional at full-time.

"I played since I remember as a human being with my father. I hope he was here to see it but I'm sure that he's seeing with God on his side and celebrating," said Alisson.

"You can't explain a lot of things in life. For me, the only reason for those kind of things is God and he put his hand on my head today and I'm feeling really blessed."

Liverpool were stunned when Robson-Kanu, making his first league start of the season for Albion, put the hosts ahead in the 15th minute after he ran onto Matheus Pereira's pass and found the bottom corner at the Hawthorns.

Liverpool levelled when Sadio Mane, starting in place of the injured Diogo Jota, intercepted a loose pass to Kyle Bartley, with the ball then falling to Salah, who hit a first-time shot into the bottom left corner.

The Egyptian's 22nd Premier League goal of the season drew him level with Harry Kane in the race for the English top-flight's golden boot award.

Kane was also on target as Spurs edged ahead of West Ham into sixth on goal difference.

The England captain fired Tottenham ahead on the stroke of half-time,curling the ball into the corner of the net after Pierre-Emile Hojbjerg's through ball behind the defence.

Hojbjerg made it 2-0 just after the hour when he followed up as Gareth Bale's shot was parried by Rui Patricio as Spurs bolstered their hopes of at least playing Europa League football next season.

Everton's miserable home record has ended their chances of Champions League football as bottom-of-the-table Sheffield United became the latest side to win at Goodison.

The Toffees have won just once at home since December and remain in eighth, three points behind Tottenham and West Ham in the battle for a Europa League place.

Leicester's FA Cup triumph means seventh place will also be good enough for a place in the new Europa Conference League next season.

John McGinn and Anwar El Ghazi were on target for Villa before the break.