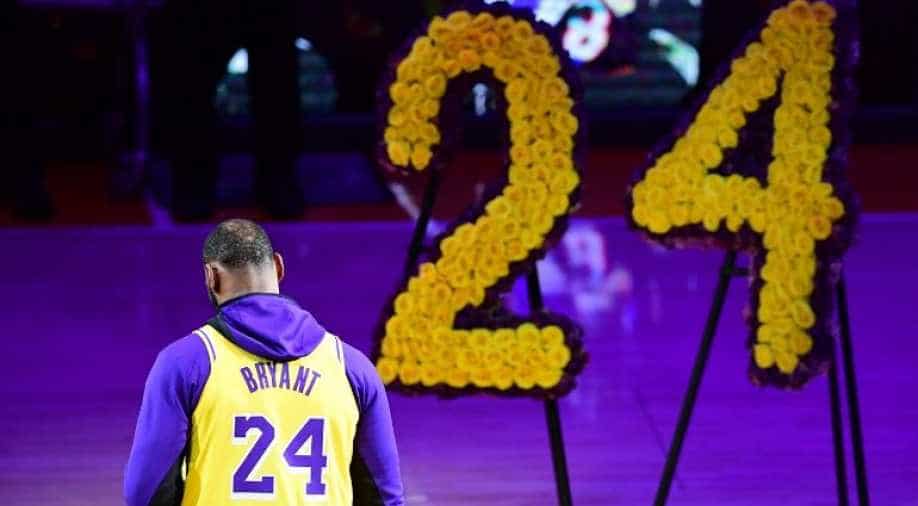 LeBron James during his speech for Kobe Bryant Photograph:( AFP )

When LeBron James was asked why did he decide to have his team wear Gianna's jersey, he replied in one word and that was "Zhuri".

The NBA has left no stone unturned to pay tribute to former NBA legend Kobe Bryant and his daughter Gianna Bryant who were killed in a helicopter crash on January 26. The crash took place when they were en route to a basketball match in Thousands Oak, in which Bryant's daughter was expected to play. Former Lakers legend was expected to coach the team.

NBA's All-Star game has planned another tribute to the Lakers legend. The match will be played between Team Giannis and Team LeBron. Giannis will don jersey no. 24 to pay their homage to Kobe Bryant, whereas LeBron's team will wear jersey no. 2 to commemorate Gianna Bryant. He said they were given an option between these two jersey numbers and he picked Gianna's jersey number.

🎥 LeBron James talks about why he chose the No. 2 jersey for the All-Star game and how the team can move forward. pic.twitter.com/V83Toecdkg

When LeBron James was asked why did he decide to have his team wear Gianna's jersey, he replied "Zhuri".

James is a 'girl dad' just like Bryant. He has a daughter named Zhuri, she is LeBron's only child.

"Tonight we celebrate the kid that came here at 18, retired at 38 and became probably the best dad we've seen over the last three years.” pic.twitter.com/0sS7e91cuz

LeBron was in tears hen he got to know about the crash, he had an emotional speech during the Lakers and Clipper match which got postponed due to the tragic event. He got a tattoo done to pay tribute to Bryant.

Kobe Bryant has always been vocal about his daughters and how fun it was for him to raise them. He called himself "girl dad".