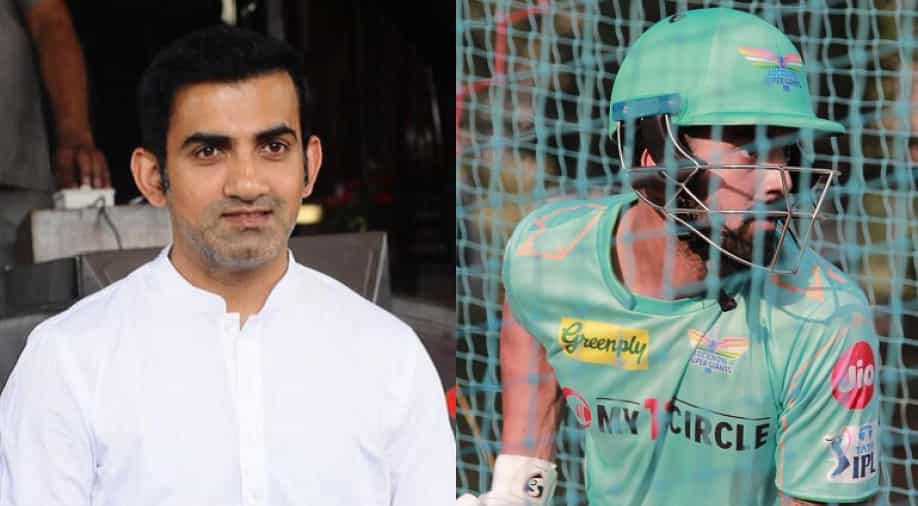 Gautam Gambhir, who will be the mentor of the Lucknow Super Giants in the upcoming IPL 2022, has issued a warning to the team's captain KL Rahul ahead of the start of the season.

KL Rahul is all set to embark on a new journey in his Indian Premier League (IPL) career as he will lead debutants Lucknow Super Giants (LSG) in the upcoming season. Rahul captained Punjab Kings for two seasons and was also their leading run-getter in both the editions before deciding to leave the franchise to join Lucknow Super Giants this year.

At Punjab Kings, the expectations were high from Rahul when he was appointed as the leader of the side ahead of IPL 2020. However, he failed to impress as a captain as Punjab failed to make it to the playoffs in two seasons under his leadership. The imbalance in Punjab's squad and an inconsistent middle-order were seen as two of the major reasons behind the team's struggles under Rahul.

As an opener, Rahul would lead from the front and score heap of runs for his franchise but the lack of support in the middle-order often hampered his strike rate and aggressive instincts while batting. Former India opener Gautam Gambhir, who will be the mentor of the Lucknow Super Giants in IPL 2022, wants Rahul to not repeat the mistakes from his time at Punjab Kings.

Gambhir said he would like Rahul the batter to take charge and take calculated risks in order to improve his and his team's performances on the pitch. Gambhir also confirmed that Rahul will not have to keep wickets for LSG to ensure he has less pressure and is relaxed as captain.

"Ultimately, it is the leader who is the flag-bearer of a team and so it's Rahul who will lead Lucknow Super Giants on and off the field. For me, it is important to have KL Rahul the batter, who is also the captain of the team rather than KL Rahul, the captain, who also bats. I hope I am able to make you understand the difference,” Gambhir said in a conversation with PTI.

"Any captain should learn to take risks. I would want Rahul to take risks and unless you take calculated risks, you won't know if you would succeed or not. Also this time, Quinton de Kock will be our wicketkeeper, so with no keeping duties, he can be free and relaxed, concentrating on his batting and leadership,” he explained.

Also Read: IPL one of the greatest physios in the world, gets everyone fit before auction: Ravi Shastri

Gambhir also issued a warning to Rahul in regards to his India captaincy aspirations. The stylish right-hander is currently the vice-captain of the Indian team across formats and is seen as one of the future leaders of the Indian team. He has also captained the Indian team in a few matches in the absence of regular skipper Rohit Sharma.

When asked if there will be additional pressure on Rahul to prove his captaincy credentials in the IPL keeping the India job in mind, Gambhir said no one should play in the IPL looking at the national team. The Lucknow Super Giants mentor believes IPl performances will not guarantee India captaincy for Rahul.

"Know one thing. There is a difference between being talked up as a future India captain and ultimately being appointed India captain. I have never believed that you should play IPL looking at the national team. IPL is a platform to express one's self. One can grow as a leader but there are no guarantees that there is a time period that IPL will help you become India captain," said Gambhir.

Lucknow Super Giants have managed to assemble a brilliant squad for their debut season in the IPL this year. Their squad features the likes of Rahul, De Kock, Manish Pandey, Avesh Khan, Jason Holder and Krunal Pandya among others who can all be game-changers on their day.