From Vinicius Junior to Pedri: The rising stars of El Clasico 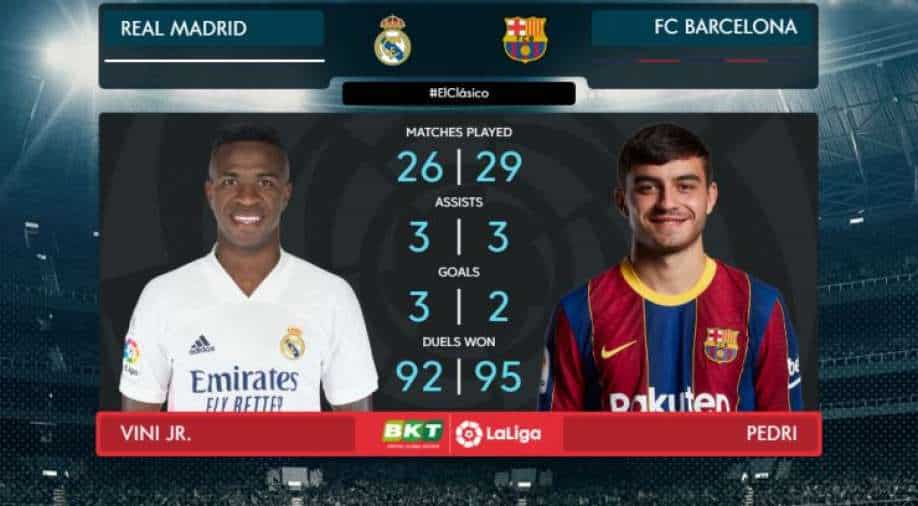 Rising stars of ElClasico Photograph:( Others )

Taking a look at the different areas of the line-up, we come across several players under the age of 23 with the potential to become genuine superstars in the years ahead. Read on to find out who they are!

El Clasico is the LaLiga Santander match with the greatest impact worldwide. It is also a unique opportunity for the young promises of Real Madrid and FC Barcelona to demonstrate their desire to triumph in the world of football.

For many young Real Madrid and FC Barcelona players, playing in ElClasico is a major milestone. Here’s a look at the young footballing stars who will try to shine their brightest and make their mark in a very special game – one that lets them showcase their talents in front of a global audience.

Taking a look at the different areas of the line-up, we come across several players under the age of 23 with the potential to become genuine superstars in the years ahead. Read on to find out who they are!

Starting with the front line, both teams have some remarkable promises. Real Madrid's has a strong Brazilian contingent. Vinicius Junior, at just 20 years of age, is expected to start for Los Blancos. The Brazilian striker has played 16 games this season and managed three goals and as many assists. His pace and dribbling are a pleasure to behold and his ability to go past defenders could be a real boon for Los Merengues in ElClasico. His fellow countryman, Rodrygo Silva, also aged 20, has played in 15 LaLiga Santander matches this term, five of them starts, in which he has provided five assists for his teammates.

Ousmane Dembele stands out up top for Los Azulgranas. He is carving out an increasingly important role in Ronald Koeman's side at the age of just 23 and is set to start in #ElClasico. The French forward comes into the game having netted the winner in the last minute against Real Valladolid to give his side a massive boost in their bid for the LaLiga Santander title. This season, Dembele has made 23 appearances with a return of five goals and two assists. The youngsters Francisco Trincao, Riqui Puig and Konrad De la Fuente are also making waves in Barcelona's front line. So far this season, the Portuguese has played 23 games and scored three goals, two of them in the same match. Meanwhile, the 19-year-old American has yet to make his first-team debut in LaLiga Santander. Riqui Puig, on the other hand, has been employed mostly as an attacking midfielder. The budding 21-year-old Spaniard has made 11 appearances in the current campaign and has one goal to his name.

Continuing with Ronald Koeman's outfit, we can pick out two players who are mainstays of the Dutch manager's team sheets. Namely Pedro Gonzalez 'Pedri' and Frenkie De Jong. The fresh-faced Spanish midfielder, just 18 years old, has featured in all 29 games so far this season, starting in 23 of them. The Canary Islander also holds the record for being the youngest footballer to score and provide an assist in the same LaLiga Santander match, at 18 years and 42 days. De Jong, 23, is the player who Barcelona funnel the majority of their play through. He has featured in all 29 matches so far this season, 27 of them as part of the starting XI. Also worth mentioning is 18-year-old academy graduate Ilaix Moriba who, despite his tender age, has played six times this season and scored one goal.

Meanwhile, for Real Madrid we can highlight the acclaimed Fede Valverde, who is making giant strides at the age of just 22. The Uruguayan already found the back of the net in the previous LaLiga Santander ElClasico this season, and totals three goals and one assist for Los Blancos. Another name that stands out is that of the academy graduate Sergio Arribas, who has played six matches in a Madrid shirt this season at the age of just 19.

For Real Madrid we can pick out one of the big names of ElClasico. All indications are that Eder Militão, aged just 23, will be given the nod to start against Barcelona. The Brazilian centre-back has played five games this season in LaLiga Santander, four of them as a member of the starting XI. The Madrid defence could also feature the young academy graduate Victor Chust, who made his LaLiga Santander debut on 9 February against Getafe CF.

For Barcelona, Koeman has regularly fielded a host of young promises. The right-back who has made the most starts this campaign is Sergiño Dest. At just 19 years of age, this promising young player has made 23 appearances, 18 of them as a starter, and he is the first American player to score a brace in LaLiga Santander. Meanwhile, the Araujo-Mingueza centre-back pairing are looking to become the first-choice duo for Los Azulgranas. Oscar Mingueza and Ronald Araujo, aged 21 and 22 respectively, have been doing an impressive job and are living up to the tough task of being FC Barcelona's central defensive pairing. This season, the Uruguayan centre-back has played a total of 16 games, 11 from the off, in which he has scored one goal and provided one assist. His partner in battle, Mingueza, has played 20 games, 17 from the start, and has also scored once and assisted once.

Real Madrid have no worries about filling the number one spot on the team sheet in the future. Their ranks include Andriy Lunin, who at the age of 22 has proven to be one of the break-out shot-stoppers in the competition in recent seasons. The young Ukrainian promise not only has experience with Real Madrid, but also at other LaLiga clubs where he has played a number of games. He is yet to feature in a match this season, with Thibaut Courtois having played every minute, but there is no doubt that he provides Zinedine Zidane with the perfect backup. However, there is another up-and-coming goalkeeper at Real Madrid with an eye on the first-team spot in the future. Diego Altube is just 21 years old, and the Real Madrid Castilla keeper is a regular in the Frenchman’s training sessions and matchday squads.

The Madrilenians are not the only ones with young talent at the very back. Barcelona have the 22-year-old goalkeeper Iñaki Peña. The Alicante-born player has yet to make his LaLiga Santander debut in a Barça shirt, but he understands exactly what it means to defend the Blaugrana crest, having played hundreds of minutes with the club's junior teams. He regularly gets the call from Koeman both for Barça's matchday squads and their training sessions and is patiently awaiting the opportunity to stand in for ter Stegen and Neto between the sticks.

Watch ElClasico tonight live and exclusive at 00.30 AM on Facebook Watch

Osaka wants 'discussion' on Olympics amid virus surge in Japan