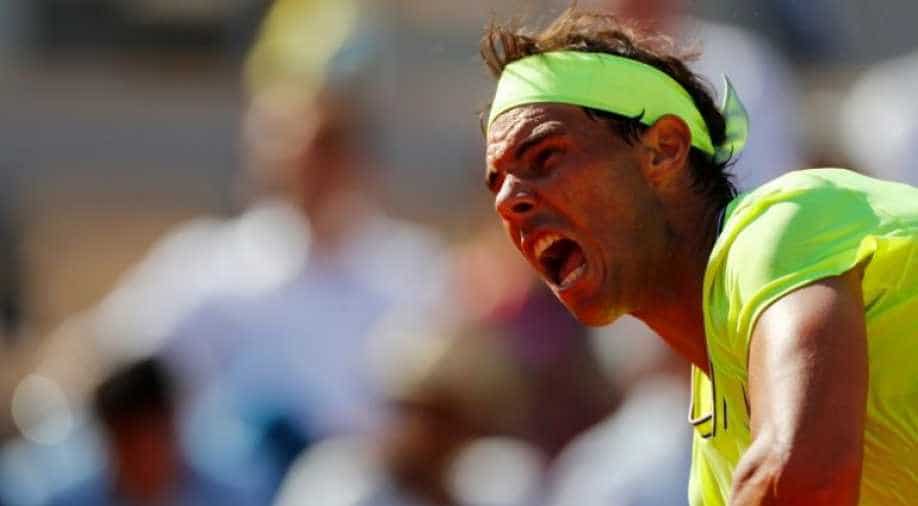 Try as he might, former world number seven Goffin could not get much closer in the second against Rafa

Rafael Nadal has set absurdly high standards at Roland Garros since winning the title on his debut in 2005 and claiming 10 more but even he was excited by his level in beating David Goffin in the third round on Friday.

With the temperature soaring and the Spaniard's forehand at its devastating best, Goffin never really stood a chance, although it is to the Belgian's immense credit that he became the first person to take a set off Nadal in Paris this year.

Nadal's 6-1, 6-3, 4-6, 6-3 victory was never really in doubt once the marauding Mallorcan took the opener in 31 sublime minutes during which he dropped one point on serve.

Try as he might, former world number seven Goffin could not get much closer in the second.

It had looked like the tennis equivalent of a heavyweight boxer taking on a lightweight, but the silky Goffin punched a few dents in Nadal's guard in the third set and delighted the crowd by extending the contest into the evening sunshine when he broke Nadal's serve out of nowhere at 4-4.

It was 10 years to the day that Nadal had lost to Robin Soderling, one of only two defeats he has suffered in Paris during his long reign as the king of clay, but any flicker of hope Goffin had of making it three was quickly extinguished.

Nadal stamped his authority back on the contest and opened up a commanding lead in the fourth that he never remotely looked like relinquishing.

"The first set and a half, I would say, it was really fantastic, incredible. It's difficult to play so well," Nadal, who will face Argentina's Juan Ignacio Londero next, in his 14th French Open fourth round, told reporters.

"I did everything perfectly," Nadal said.

Asked if his concentration had dipped slightly, he said the concession of the set was more about Goffin's excellence.

"You need to be realistic. The level that I kept during the first 45 minutes, you can't really maintain that easily. It's very difficult, because it was almost the top level, the highest level I could play," Nadal added.

Londero edged a five-setter against French wildcard Corentin Moutet to become the first debutant to get this far since Goffin managed it in 2012.

If Londero does not know what is heading his way, then Goffin spelt it out succinctly.

"He makes you feel like you hit the ball so slowly," Goffin said.

"It looks like you serve at 120kph, it looks like you hit with softballs because it doesn't go. He's so fast and he's behind and he's playing so heavy. This is his courtyard. It's very difficult to follow his pace," Goffin added.