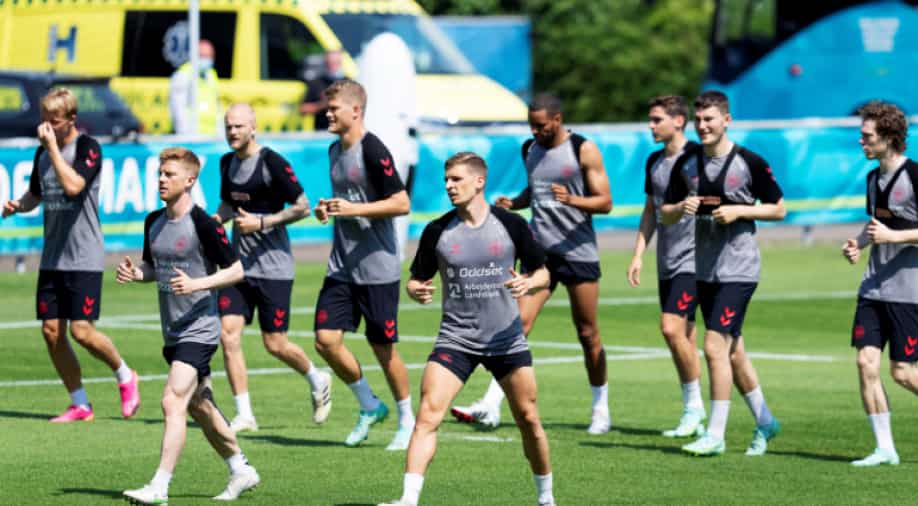 Denmark are without a point in a Euro 2020 campaign dominated by Christian Eriksen's cardiac arrest, but they hope fans will rouse them for Monday's last-chance game against Russia.

Denmark are without a point in a Euro 2020 campaign dominated by Christian Eriksen's cardiac arrest, but they hope fans will rouse them for Monday's last-chance game against Russia.

"It's like our Euros are starting right now," coach Kasper Hjulmand said on Sunday ahead of the game at Parken Stadium in Copenhagen where fans have stayed passionately behind the team during narrow defeats to Finland and Belgium.

"We have a knock-out game ahead of us and only if we win we will have the chance to move further in the tournament," the 49-year-old manager told a news conference.

"We respect Russia, it's going to be a tough game and we need the support we had last time (against Belgium)."

Danish fans were left stunned and emotional after midfielder Eriksen's collapse in the opener, with the players looking shell-shocked when play resumed and Finland scored to win 1-0.

An outpouring of support from the stadium propelled the Danes to an early lead and stirring performance against top-ranked Belgium in the next game, but despite scoring an early goal they also lost that game 2-1.

"For us, to sit here with zero points still is also painful, so it is a massive opportunity for us," said goalkeeper Kasper Schmeichel.

Belgium top Group B on six points with the Danes bottom on zero and need to beat Russia to have any chance of advancing to the knockout stage. Finland, who like Russia have three points, take on Belgium in St. Petersburg at the same time to decide the outcome of the group.

Hailed as a hero for his quick action and leadership after Eriksen collapsed, Denmark captain Simon Kjaer said the team deserved success.

"We go into the game with the mentality that we have to get there (to the knockout stage), and after everything we've been through I think we deserve it," the central defender said.

"You can be sure that everything will be left out on the pitch tomorrow - with the support and the quality that this team has, I'm confident about the match."

Russia, who have not reached the knockout stage of a European championship since 2008, need either a win against Denmark to get into the last 16 or a draw if Finland fail to beat Denmark in the other Group B match on Monday."We think that this will be a difficult match," Cherchesov told a news conference, highlighting Denmark's explosive play and Yussuf Poulsen's early goal in the Danes' 2-1 loss to Belgium, the world's highest-ranked side.