'Few have achieved what you did': Tributes pour in on Twitter as Virat Kohli gives up India's Test captaincy 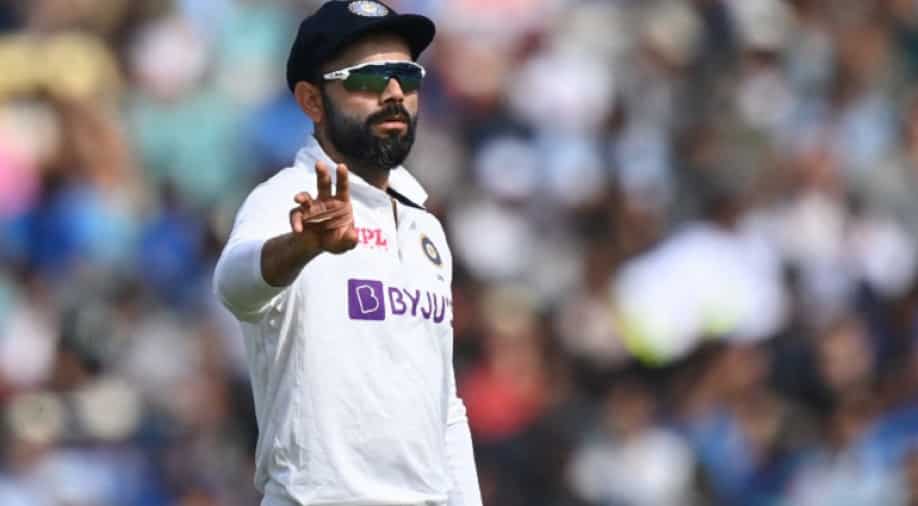 Tributes poured in from all corners as Virat Kohli gave up India's Test captaincy. Photograph:( AFP )

Tributes poured in from all corners as Virat Kohli stepped down as India's Test captain on Saturday (January 15). Kohli took to Twitter to announce the decision which has left the cricket fraternity in shock.

Virat Kohli on Saturday (January 15) left the entire cricket fraternity surprised as he announced that he will be stepping down as the Test captain of the Indian team. Kohli's decision to give up captaincy comes after India's 2-1 loss in the recently-concluded three-match Test series against South Africa.

Kohli had led the visitors in the first Test of the series where he inspired the team to a comprehensive win by 113 runs before missing the second game due to a back issue. Kohli returned to lead India in the series-deciding third and final Test but failed to help India clinch their maiden Test series win in South Africa as the hosts won the all-important game by seven wickets.

Kohli, who had given up India's T20I captaincy last year, had at the time expressed his desire to continue leading the team in both Tests and ODIs. However, he was replaced as the ODI captain ahead of the South Africa tour with Rohit Sharma taking over as India's new captain in limited-overs formats.

Kohli was later involved in a row with the Board of Control for Cricket in India (BCCI) over his sacking as ODI captain and had also contradicted BCCI president Sourav Ganguly's comments in a fiery press conference ahead of the South Africa tour.

Nonetheless, Kohli, who has always maintained he likes to give his 120 percent when playing for India, led India exceptionally well in his final series as Test captain. Kohli said he will be can't be 'dishonest' to his team and not give his 120 per cent while announcing his decision to give up Test captaincy.

Also Read: Virat Kohli steps down as India's Test captain: Have absolute clarity, can't be dishonest to my team

Tributes started pouring in from all corners and fans, former cricketers and experts joined the bandwagon to congratulate Kohli on a magnificent stint as the Test captain of the Indian team. Kohli led India in 68 matches and won 40 games as captain to sign off as the most successful Indian skipper of all time.

It’s been a remarkable journey King Kohli @imVkohli! Very few have been able to achieve what you have. Gave your all and played like a true champion each time. May you grow from strength to strength! Onwards and upwards

Whenever the talk of Indian cricket captains will arise in test cricket @imVkohli ‘s name will be up there,not only for results but the kind of impact he had as a captain. Thank you #ViratKohli

When Virat took over as Test captain, India winning a test overseas was an achievement, now if India lose an overseas test series it is an upset. And that's how far he has taken Indian cricket forward, and that will be his legacy. Congratulations on successful reign @imVkohli pic.twitter.com/My2MOXNwMc

Although I also am shocked by @imVkohli sudden decision, I respect his call. I can only applaud him for what he has done for world cricket & India. Easily one of the most aggressive and fittest players India has had. Hope he’d continue to shine for India as a player. pic.twitter.com/W9hJGAYqhv

Virat Kohli steps down as India's most successful Test captain

Virat, you can go with your head held high. Few have achieved what you have as captain. Definitely India's most aggressive and successful. Sad day for me personally as this is the team 🇮🇳 we built together - @imVkohli pic.twitter.com/lQC3LvekOf

Congratulations @imVkohli on a stunning run as the Indian captain. You can be very proud of what you have achieved so far, and for sure, your name will be up there among the best leaders in world cricket https://t.co/DieCKL4bhE

Kohli took over Test captaincy full-time from MS Dhoni in the year 2014 and has since been instrumental in making India a powerhouse in the purest format. Kohli led India to some memorable wins both at home and overseas and was the first Indian captain to win a Test series in Australia.