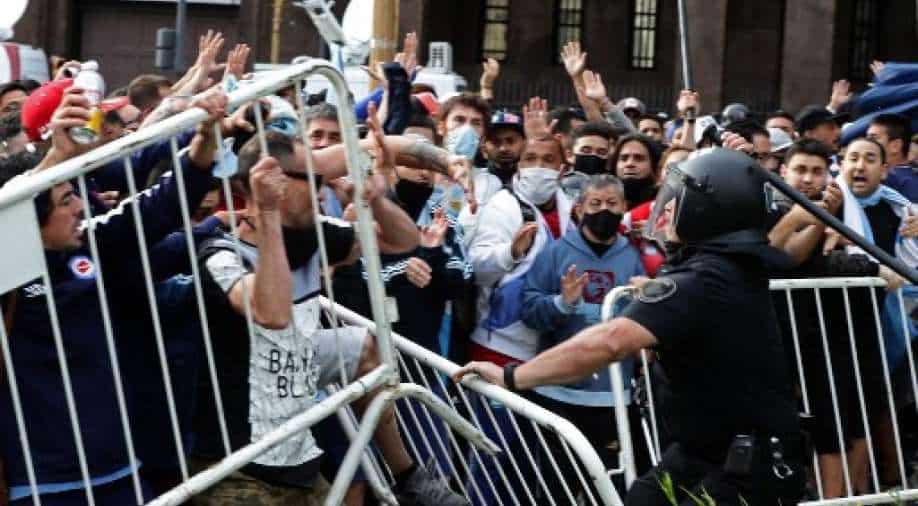 Tens of thousands of Argentinians queued to say a final farewell to their football icon in an outpouring of love before the funeral.

Massive crowds gathered to pay their last respects to football legend Maradona as authorities announced the Argentine star would be buried on the outskirts of Buenos Aires on Thursday.

Fans confronted riot police as they tried to reach the Casa Rosada presidential palace to pay their final tribute to the late Argentine football star in Buenos Aires.

Maradona died of a heart attack on Wednesday while recovering from brain surgery at the age of 60. He will be laid to rest at the Jardin de Paz cemetery where his parents were also buried.

Tens of thousands of Argentinians queued to say their final farewell to the football icon in an outpouring of love before the funeral. There was heartbreak and tears as fans wept with some wearing the World Cup winner's number 10 Argentina jersey as they gathered at the Casa Rosada presidential palace in Buenos Aires to see his coffin.

Maradona who won the World Cup for Argentina in 1986 in Mexico as his "hand of God" goal against England marked him out as controversial figure but his feats on the football field won him fans across the world.

The Argentinian star took his country into the World Cup finals in Italy in 1990 where it lost to Germany by a solitary goal. Maradona was ejected from the 1994 World Cup in the United States after he failed a doping test.

Maradona battled health issues in the latter half of his life as he was admitted to hospital three times in the last 20 years but seemed to emerge out of the abyss, but on Wednesday the star was declared dead as a nation went into mourning with millions heartbroken across the world.

Argentina's current superstar Lionel Messi led the tributes as he said: "He has left us but he will never leave us because Diego is eternal."