In Argentina, Maradona’s Death Sets Off a Vivid Display of Public Grief 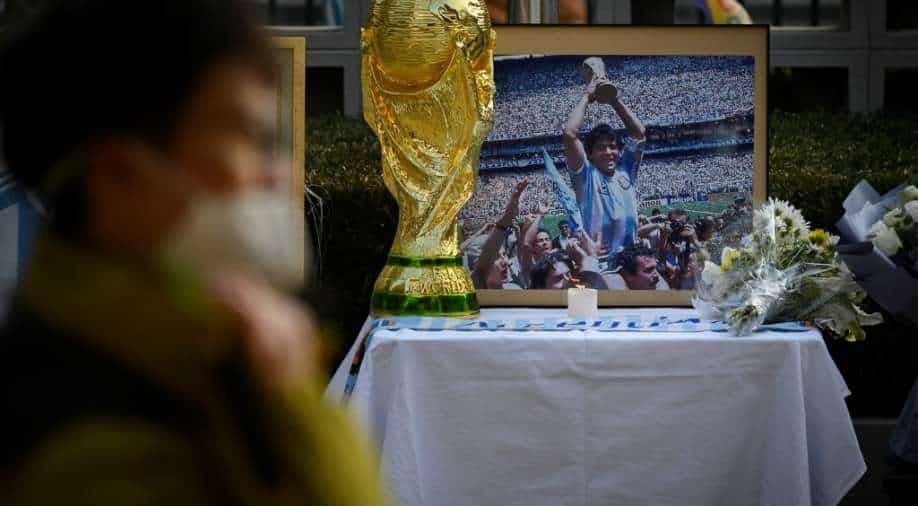 People laid flowers and lit candles below the mural of Diego Maradona outside the stadium here that bears his name. A man cried inconsolably. At the Obelisk in central Buenos Aires, another man waved a banner depicting Maradona that read, “God Is Argentine.”

People laid flowers and lit candles below the mural of Diego Maradona outside the stadium here that bears his name. A man cried inconsolably.

At the Obelisk in central Buenos Aires, another man waved a banner depicting Maradona that read, “God Is Argentine.”

There was a sense of incredulity in Argentina on Wednesday as word spread that the soccer star had died that morning at his home in Tigre, north of Buenos Aires. The government decreed three days of mourning.

Often called one of the game’s best players, Maradona was revered by his fellow Argentines — not just for his prowess on the field but also for his rise from poverty to global stardom. He stayed a national hero even as his personal life, which included long spates of drug and alcohol abuse, made him tabloid fodder around the world.

As people gathered across the country to honor the man often simply referred to “El Diego,” some chose the Buenos Aires stadium where he got his start in 1976, as a young player in the Argentinos Juniors club, and which was later renamed for him.

“The first time I saw him I couldn’t believe it,” said Hugo Daniel Santiuste, 66, who said he saw Maradona’s second-ever match at the stadium. “I had never seen anything like it.”

But even Argentines born too late to see him play in person were mourning.

“I feel like a member of my family just died,” said Joaquín López Castan, 19. “My entire life I wanted to play soccer like Maradona.”

Maradona underwent brain surgery earlier this month, and he had had numerous medical problems in the past. But his death, which a spokesman said was from a heart attack, still came as a shock to many.

“He was Maradona; he always managed to pull through,” said João Dejtiar, 19.

Several places around Buenos Aires became outdoor mourning spaces for fans, including the morgue where officials brought his body; his humble onetime home in Villa Fiorito, the impoverished area where he grew up; and La Bombonera stadium, where he once played as a member of the Boca Juniors club.

Hundreds also gathered in downtown Buenos Aires as the government planned what was expected to be a massive wake at the presidential palace Thursday.

At 10 p.m., people applauded from their balconies in honor of Maradona, who wore the traditional No. 10 jersey of a playmaker.

As Wednesday turned into Thursday, people seemed in no hurry to get home. Hundreds chanted and sang songs for Maradona outside the presidential palace as some started to line up for the wake.

“Of course, Maradona was the greatest soccer player this country has ever seen, but that doesn’t tell the full story. There is something that makes him much more than that,” said Alejandro Wall, a sports journalist. “Diego is the great narrator of Argentina."

Maradona is invariably remembered for leading Argentina to victory in the 1986 World Cup. In the infamous quarterfinal against England, he scored one of the most beautiful goals in the game’s history, as well as an illegal hand goal. (“It was scored a little bit with the head of Diego and a little with the hand of God,” he later said of that goal.)

The English were furious, but in Argentina — still suffering the humiliation of its 1982 defeat by Britain in the short war over the Falkland Islands, which Argentina calls Malvinas and claims as its own — Maradona was lauded.

“A narrative is created that the goal wasn’t illegal because in reality it was God doing justice after the defeat in the 1982 war,” said Lívia Gonçalves Magalhães, a historian at Federal Fluminense University in Brazil who studies the intersection of soccer and politics in South America.

“It was the happiest moment of my life,” said Juan José Azcurra, 67, his tears giving way to a smile as he recalled the goal. “I will never forget it.”

That World Cup was doubly sweet because “no one had faith in the team and in the end everything they did was marvelous,” said Veronica Moreira, an anthropologist who studies sport at the National Scientific and Technical Research Council, an Argentine government agency.

Argentina’s victory in the final against West Germany cemented Maradona’s position as the leader who took the underdog team to victory.

Beating the odds was a constant theme in Maradona’s life story. His rise from poverty was one reason that many Argentines continued to identify with him even as he became a world celebrity.

“He never stopped being part of the people,” said Gastón Tescusinsky, 44, who has a tattoo of Maradona on his arm. “He was always the kid from Fiorito.”

Maradona wore his leftist politics on his sleeve, and Magalhães noted that he would publicly criticize the leaders of FIFA, soccer’s global governing body, “without worrying about repercussions.”

“Maradona was a contradictory character who garnered a lot of empathy,” said Rodrigo Daskal, a professor who is a researcher at the Sports Study Center at San Martín National University. “Maradona was always authentic and never tried to dress up any part of his life.”

Maradona’s candor about his struggles with alcohol and drugs was appreciated by many of his fans, especially those who had experience with addiction.

“My old man had problems with drugs, who am I to judge Maradona?” said Pablo Neyret, 42, whose eyes welled up with tears.

Songs were written in Maradona’s honor, and some of his phrases entered Argentines’ everyday lexicon. One was “they cut off my legs,” which he said after being kicked out the 1994 World Cup for doping.

Victoria Fassa, 43, called Maradona “a rebel who was passionate above all else and said what he thought without caring about the consequences.”