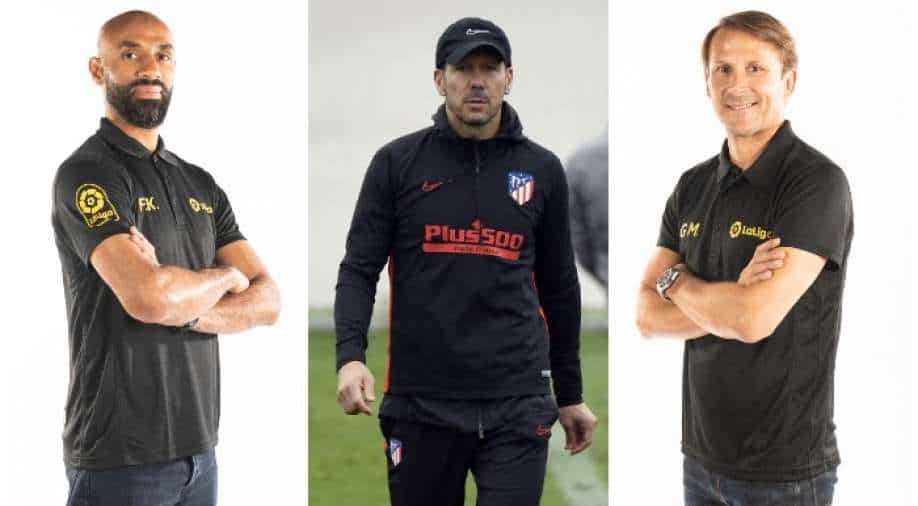 The LaLiga 2020-21 title race is set to reach the pinnacle with top-four sides set to play each other in the next 48 hours as the battle for the coveted trophy heats up. Gameweek 35 will see third-placed FC Barcelona lock horns with league leaders Atletico Madrid on Saturday whereas third second-placed Real Madrid host fourth-placed Sevilla on Sunday.

The LaLiga 2020-21 title race is set to reach the pinnacle with top-four sides set to play each other in the next 48 hours as the battle for the coveted trophy heats up. Gameweek 35 will see third-placed FC Barcelona lock horns with league leaders Atletico Madrid on Saturday whereas third second-placed Real Madrid host fourth-placed Sevilla on Sunday.

Since February, Atletico Madrid have conceded a 10-point lead in the LaLiga standings and a defeat to Barcelona on Saturday will see Los Colchoneros lose out the top spot to the Lionel Messi-led outfit. With a two-point advantage, a draw for Diego Simeone and Co. would help them maintain their league standings over Barcelona but could open a window for Real Madrid to move atop the standings on Sunday.

Real Madrid start the weekend while trailing by two points to Atletico Madrid but the Los Blancos have a superior head-to-head goal difference, meaning they would end up winning the LaLiga if they finish level on points with either of their rivals.

Atletico Madrid played out five draws and suffered two defeats in their last 11 LaLiga matches – and the results have dented their title aspirations massively. With one of the highest-paid managers in the world at their helm, Atletico Madrid would be desperate to close out on the league matches but face a stern challenge. But would it be called a failure if Atletico Madrid fail to lift the LaLiga?

“Fair play to play to them how they have competed with Barcelona and Real Madrid. They have been top of the league for almost the entire season despite pressure from other teams in the league. Of course, the Atletico Madrid fans might feel disappointed if they don't win it, especially when they have been on top for so long. What you have done before doesn't matter now, all that matters is points per game now. Atletico Madrid need to deliver now. The way they have competed this season is commendable but I don't think it will be deemed as a failure if they don't win the LaLiga,” former Spain international and LaLiga Ambassador, Gaizka Mendieta answered WION query during a virtual press conference.

However, former Sevilla forward Frederic Kanoute feels otherwise as he said any team or coach would have preferred to keep the 10-point league heading into the final phase of the season.

“I think Atletico Madrid will be very disappointed if they fail to win the LaLiga. As a coach, more, because the advantage they had just a couple of months ago. As a coach, when you have a lead of more than 10 points, you want to keep it as you are competing against big clubs like Barcelona, Real Madrid, Sevilla. At one point it was looking like it won't be such a dramatic end. But as they were competing with big clubs, I was pretty sure at some point, Barcelona and Real Madrid would make their job difficult. I feel, as a coach it is important to manage your team well and Simeone has done a great job and it is difficult to keep that momentum going throughout the year,” former Sevilla forward and LaLiga Ambassador, Frederic Kanoute answered a WION query during a virtual press conference.

Could Atletico Madrid sack or move away from Diego Simeone if they fail to win the LaLiga?

“I wouldn't say that because of this, his job would be in danger. But maybe, Atletico Madrid would want to start a new project with a new coach but it won't be due to them not winning the LaLiga (if that happens). But we hope we can keep him in LaLiga, as he is a big asset to the league,” Kanoute added.

While Barcelona, Atletico Madrid and Sevilla head into the gameweek 35 fresh, Real Madrid are coming on the back of a crushing UEFA Champions League semi-final defeat to Chelsea on Wednesday. While it would be a challenge for Zinedine Zidane to motivate the tired-legged Real Madrid players, Barcelona would be without their manager Ronald Koeman, who has been handed a touchline ban for his antics in their last game.

ALSO READ: Simeone will not change gameplan for Barca showdown

How big a disadvantage would it be for Barcelona to be without their manager for such a monumental game in the LaLiga title-race scenario?

“It is always important to have the manager on the touchline. It provides a certain authority in some moments of the game with guidelines and tactical awareness. I don't think it is essential at this point. The players of course know what to do on the field and how to do it, and require minimal details from the sideline. But the line of communication between Koeman and his staff going to be continued. So in that respect, although it has an impact but at this moment, it is minimal,” Gaizka Mendieta explained.

Barcelona will lock horns with Atletico Madrid on Saturday while Real Madrid take on Sevilla on Sunday. Catch LaLiga action live and exclusive this weekend on Facebook Watch.