Exclusive | Excited to play for CSK and under MS Dhoni: Josh Hazlewood 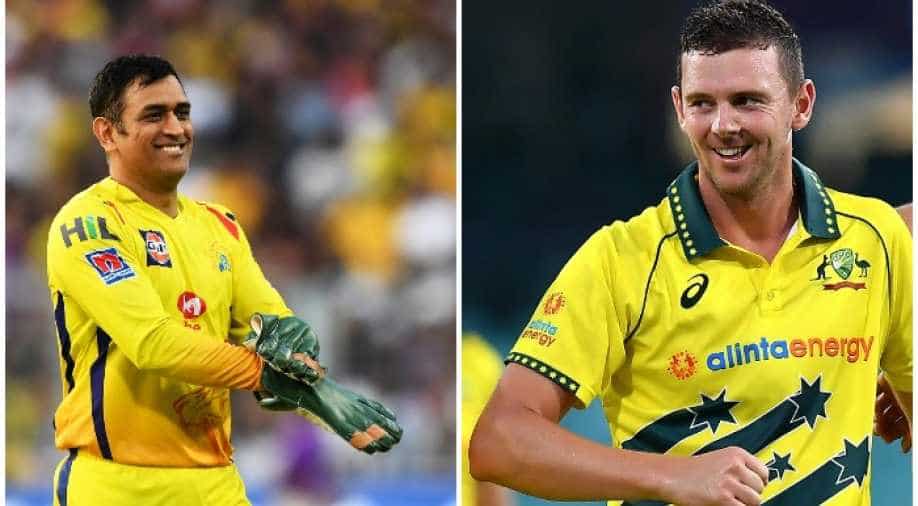 Australian speedster Josh Hazlewood, in an exclusive interview with WION, said he is excited to don the CSK yellow and help the team win more trophies while playing under the captaincy of MS Dhoni. The Aussie quick is now determined to make a mark in T20 format of the game while playing in arguably the best T20 tournament in the world.

In the Indian Premier League (IPL) 2020 auction, Chennai Super Kings (CSK) roped in the ever-reliable Australian pacer Josh Hazlewood for $0.28 million (INR 2 crore) to bolster their pace attack. Although Hazlewood hasn’t played that much of T20 cricket in recent past, the Australian quick has been successful whenever he has turned out for Sydney Sixers in the Big Bash League and for Australia in the shortest format of the game.

Hazlewood, in an exclusive interview with WION, said he is excited to don the CSK yellow and help the team win more trophies while playing under the captaincy of MS Dhoni. Hazlewood was a part of Mumbai Indians squad in 2014 but didn’t get a game under his belt. However, the 29-year-old is now determined to make a mark in T20 format of the game while playing in arguably the best T20 tournament in the world.

“I am pretty excited actually. It’s been a while that I have been in the squad. I haven’t played a game yet but I was with Mumbai Indians squad in IPL 2014. I have been using this time – April and May – for rest, preparing for other Test tours for Australia. And now it is a good opportunity to play some T20 cricket and put my name up in that format of the game, in which I haven’t played too much. It is the best T20 competition in the world. So looking forward to it and hopefully to do well for CSK,” Hazlewood told WION.

Hazlewood, who has 26 wickets in 19 BBL matches for the Sydney Sixers at an impressive strike-rate of 16.4, is now looking at conquering the biggest and most glamourous T20 tournament in the world. Lovingly called Hoff by his teammates, Hazlewood said he is happy that CSK gave him an opportunity and is now looking forward to reward them in IPL 2020. The Aussie quick added that he was ecstatic to be picked by one of the most successful and followed franchise in the world.

“I was ecstatic to be picked up by CSK. Pat was obviously different, and he is pretty excited to be out there and do well for Kolkata. I haven’t played a lot of T20 cricket in the last five years but I am happy CSK gave me an opportunity and hopefully, I can reward them,” Hazlewood said.

Fans are eagerly waiting to see ‘Captain Cool’ MS Dhoni take the field once again in IPL and Hazlewood said he excited to play under Dhoni’s leadership while adding that they both are pretty similar in terms of being calm under pressure.

“Again, I am excited! I think he is a pretty similar player to me – very relaxed and calm – and that’s how I play my best cricket, that’s when I enjoy my cricket. Hopefully, we are a good match,” Hazlewood said.

Although Hazlewood has cemented his legacy as one of the finest red ball bowlers for Australia, many still underrate him in limited-overs format. When asked about how crucial is it for bowlers to work on their variations when it comes to playing the T20 brand of cricket, Hazlewood said that he always looks to improve and develop different kind of deliveries and change-ups while adding he is ready to deliver in the IPL and fulfill the trust shown by the franchise.

“I am always working on different deliveries, different change-ups and slower balls. Hopefully in the next couple of months, I can work on settling in and deliver in the IPL. Under a lot of pressure but it is always good to try things,” said Hazlewood concluded.

Meanwhile, the Indian Premier League is set to be staged in the UAE with the tournament all set to start from September 19.