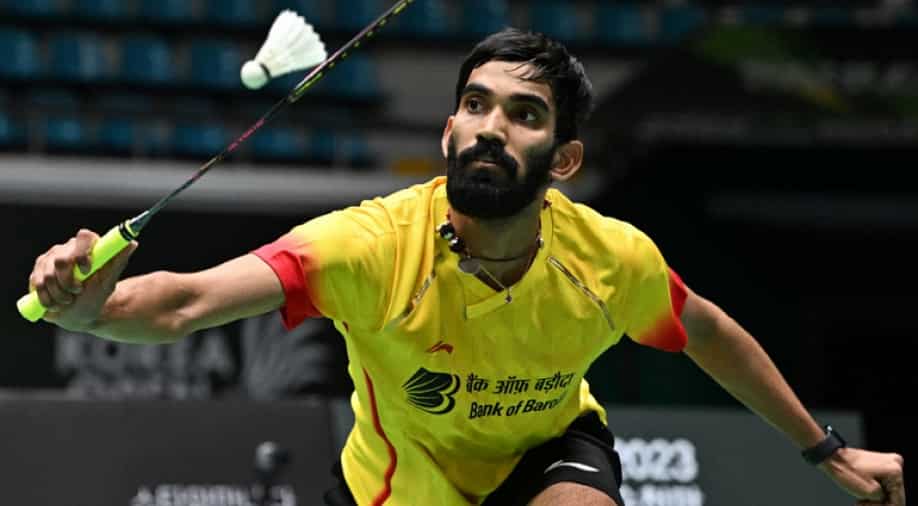 In an exclusive interaction with WION, ace Indian shuttler Kidambi Srikanth opened up about India's memorable maiden Thomas Cup triumph. Srikanth led from the front and remained unbeaten throughout the tournament.

Indian men's badminton team created history last week as they thrashed Indonesia 3-0 to win the prestigious Thomas Cup for the first time in the 73-year-long history of the tournament. India were up against 13-time champions Indonesia, who were overwhelming favourites in the final but managed to stun the badminton giants with a performance for the ages.

Indian men's badminton team created history last week as they thrashed Indonesia 3-0 to win the prestigious Thomas Cup for the first time in the 73-year-long history of the tournament. India were up against 13-time champions Indonesia, who were overwhelming favourites in the final but managed to stun the badminton giants with a performance for the ages.

India enjoyed a dominant run throughout the tournament as they defeated Malaysia in the quarterfinals before outclassing Denmark to secure a spot in the final for the first time in the history of the tournament. India's best finish at the Thomas Cup before this year had come in 1979 when the Indian men's team starring the likes of Prakash Padukone and Syed Modi lost against Denmark in the semifinal.

However, history was rewritten on Sunday (May 15) as Indian shuttlers downed 13-time champions Indonesia in the final. Kidambi Srikanth, who led the Indian team in the tournament, remained unbeaten throughout winning all six matches to seal a historic triumph for the country.

After Lakshya Sen and the pair of Satwiksairaj Rankireddy and Chirag Shetty gave India a 2-0 lead by winning their respective matches, Srikanth was up against a seasoned campaigner in Jonatan Christie. He got the better of Christie in straight sets to seal the deal for India and wrapped a 3-0 win for his team.

In an exclusive interaction with WION, an elated Srikanth said no one had given them a chance and beating Indonesia felt like a far fetched dream for Indian fans but the players gave their all to ensure they returned home with the Thomas Cup trophy.

"In the final, I don't think anyone would have even dreamt of the Indian team winning 3-0 against Indonesia," Srikanth told WION.

"All these three teams (Malaysia, Denmark and Indonesia) were ranked higher than India in this tournament and all three teams had good players and were very strong but we did really play well and never gave up. We fought hard till the end.

To beat all the former champions, and beating defending champions Indonesia in the final is a great feeling. I won't be able to do justice if I try to put it in words," he added.

While Srikanth defeated Christie in the third and final match, young Lakshya Sen had given India the perfect start in the final with a thrilling win over Anthony Ginting in the first match of the final. Sen lost the first game 21-8 but stage a brilliant comeback to stun Ginting 17-21, 16-21 to give India a 1-0 lead.

Satwik and Chirag also went down against the Indonesian pair of Muhammad Ahsan and Kevin Sanjaya Sukamuljo in the first game of the second match before bouncing back to beat them 18-21, 23-21, 21-19 to extend India's lead to 2-0. It was the unstoppable Srikanth, who then wrapped up the final by outclassing Christie.

Crediting each of the ten players in the team for playing their roles to perfection, Srikanth said everyone stepped up when it mattered and played their A-game under pressure.

"Yeah, individually we have always done well but now to come together and perform as a team and to be this consistent throughout the tournament is a great effort from everyone. All ten players in the team played their part perfectly and the credit goes to everyone. Big congratulations to all ten players," said Srikanth.

"When I said everyone played their part, if you actually see, Prannoy played the decider in the quarterfinal and the semi-final. It was 2-2 and he took it upon himself and won those matches for us. For it to come that far, Satwik and Chirag did really well to win their matches. It was a collective effort, each one stepped when it mattered and played their A-game," he explained.

I have been privileged to inspire the next generation: Kidambi Srikanth

Srikanth has been around for a number of years now and has achieved several highs so far in his career. He was the first Indian and only the 4th male shuttler to win as many as four Super Series titles in a calendar year in 2017. He was also part of the Indian team which won the gold medal at the Commonwealth Games in 2018.

Speaking about the historic firsts that he has been involved in, Srikanth said he felt privileged to be in a position to inspire the next generation and make them believe that they achieve great things at the international level.

"I did something for Indian badminton and then the next generation can look up to it and I made people believe that they can do it at the international level," concluded the Indian men's badminton team skipper.