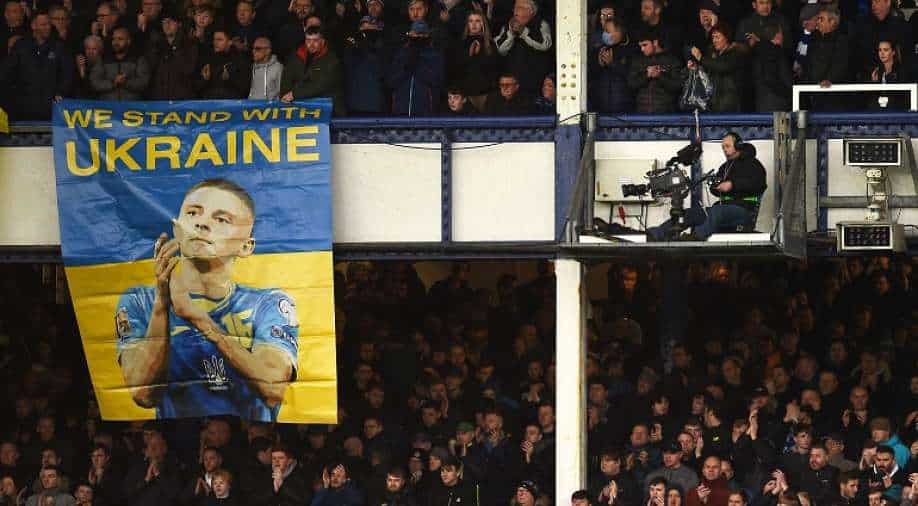 A banner that reads "We stand with Ukraine" is displayed during the EPL match between Everton and Man City. Photograph:( AFP )

Everton has suspended sponsorships with the Russian companies USM Holdings, MegaFon and Yota with immediate effect as a result of Russia's invasion of Ukraine.

Everton has suspended all commercial sponsorship arrangements with the Russian companies USM Holdings, MegaFon and Yota with immediate effect as a result of Russia's invasion of Ukraine, the Premier League club said on Wednesday.

USM Holdings and MegaFon are linked to billionaire and oligarch Alisher Usmanov, who was sanctioned by the European Union for Russia's invasion of Ukraine. Mobile virtual network operator Yota is part of the MegaFon Group.

Everton had agreed to a 30 million pounds ($39.97 million) naming rights deal with Usmanov for their proposed new Bramley-Moore Dock stadium back in 2020. His holding company USM has sponsored Everton's Finch Farm training ground since 2017.

"Everyone at Everton remains shocked and saddened by the appalling events unfolding in Ukraine," Everton said in a statement.

"This tragic situation must end as soon as possible, and any further loss of life must be avoided."

ALSO READ: Roman Abramovich wants to get rid of Chelsea so he offered to sell it, says Swiss billionaire Hansjorg Wyss

The club added they were providing "full support" to their defender and Ukraine international Vitalii Mykolenko and his family.

Usmanov previously had a 30% stake in Arsenal but sold it to American Stan Kroenke in 2018.