Euro 2020: England fans created mayhem on the streets of London and outside Wembley stadium 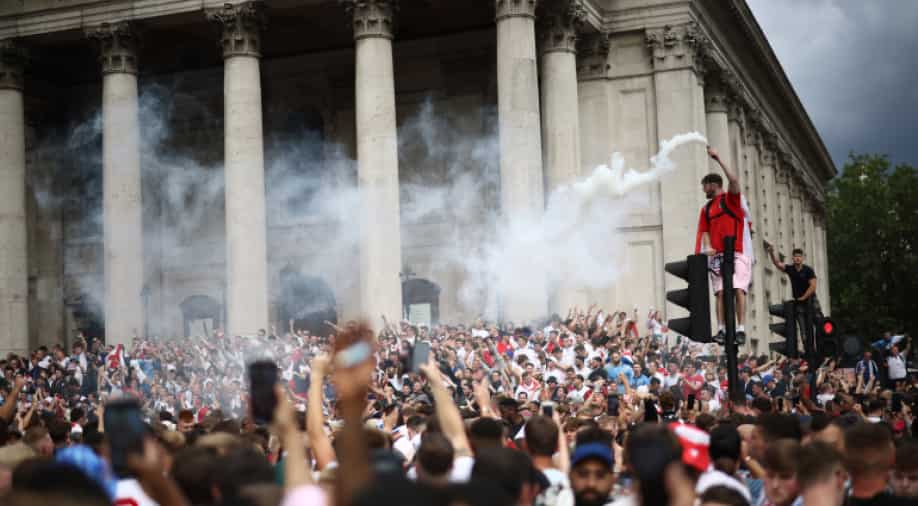 The air was filled with the smell of smoke across the streets. A few fans had obviously begun early, faltering around and breaking bottles against light posts, while mounted police and officials in revolt gear stood to watch around the fan zone.

Unacceptable scenes broke out in London on Sunday as many fans without tickets attempted to enter the Wembley Stadium to view the Euro 2020 final between Italy and England. The video recordings of fans causing uproar and combating with police to go past made rounds on online media.

The roads of Leciester City additionally considered disorder to be a few alcoholic fans threw bottles, cans, and traffic cones, and furthermore set up firecrackers. This is the first time through England have arrived at the final of the Euro Championships.

A huge number of football fans, many shrouded in the national flag, meandered the roads of London, shouting that football was returning home, reciting and applauding on a prompt to the sound of a siren. The air was filled with the smell of smoke across the streets. A few fans had obviously begun early, faltering around and breaking bottles against light posts, while mounted police and officials in revolt gear stood to watch around the fan zone.

Before the match started, a huge number of fans without tickets slid on Wembley Stadium, some scrambling up trees and traffic signals. There were tumultuous scenes as safety crew and police fought with hundreds who attempted to storm hindrances and enter the arena. The London Metropolitan Police conceded that few ticketless fans had entered the 90,000-seat arena, where the limit should be restricted to a pandemic-confined 67,000.

Police can’t stop the England 🏴󠁧󠁢󠁥󠁮󠁧󠁿 fans without tickets storming the ticket entrances at Wembley - not enough riot police to deal with the weight amount of the crowd - kicking off !!! pic.twitter.com/ZM7KpbMmQJ

During the frenzy, many fans were seen stomping on down the security cordon at the Club Wembley entrance. The police had to pursue them down to guarantee no ticketless fan enter the arena. Although, the crowd was too huge to even think about taking care of, and many fans figure out how to enter the arena that paralyzed the safety officers. A few fans were seen tossing punches as the gatekeepers.

While England fans were expecting the EURO 2020 Cup to come home, it conflicted with their desire and Itay were the ones to take it to Rome after winning 3-2 on penalties at Wembley Stadium.

While the players were occupied on the field, fans had their own clash occur outside the iconic arena on Sunday after England lost to Italy. The English fans, who couldn't process the loss, saw them superfluously attack the Italian fans.