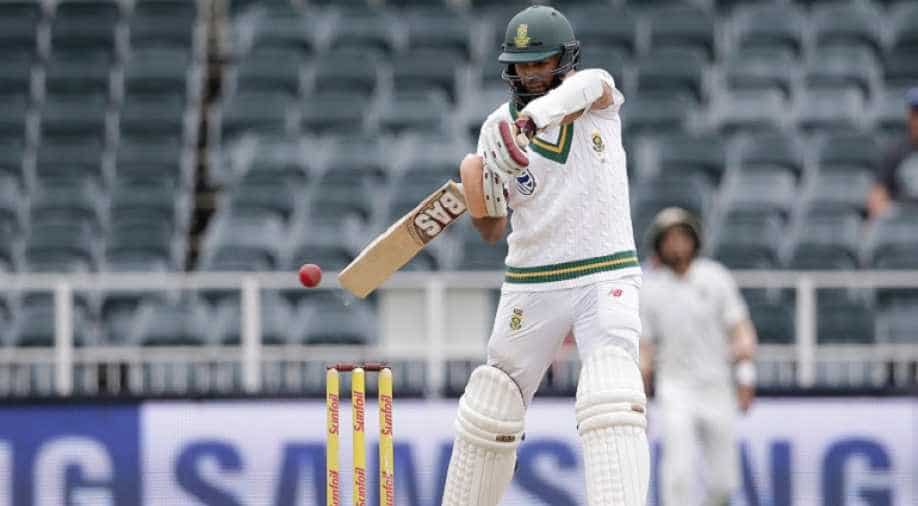 Dean Elgar and Hashim Amla frustrated India with an unbeaten 64-run stand, taking South Africa to 69 for one at lunch on a pitch that appears to have become less threatening in the third and final Test here.

The hosts need another 172 runs to win.

This was after play was delayed due to heavy morning rains in Johannesburg. The team arrived on schedule at the Wanderers but had to wait for better conditions for play to resume.

The umpires Aleem Dar and Ian Gould had two inspections at 10 am and 10.30 am (local time). After the second inspection, they were happy enough to allow play to resume 30 minutes later.
Finally the game began at 11 am local time, with all three sessions rescheduled, after an hour's delay. The morning session was 90 minutes long.

Starting from their overnight score of 17/1, South Africa made steady progress. Jasprit Bumrah (0-20) completed his over from last evening, while Bhuvneshwar Kumar (0-20) and Mohammed Shami (1-15) started off proceedings properly.

Elgar encountered a couple hairy moments once again, against Bumrah in particular, but settled down shortly enough. He shrugged off whatever happened last evening and looked more confident as the session went on.

At the other end, Amla looked ever solid. He left the ball well and looked to score whenever the opportunity presented itself.

India gave away too many quick runs early on in the session, not helped by uneven bounce as they conceded 9 extras in the first hour of play. But later they tightened up the scoring.

Bumrah and Shami were guilty of getting carried away and bowling a tad shorter, even if they didn?t concede too many runs. They didn?t hit the length enough, where the uneven bounce truly lies on this pitch, and didn?t really attack the batsmen enough.

Kumar and Ishant Sharma (0-10) managed to keep things quiet though, even as Amla and Elgar built their gritty partnership.

South Africa crossed 50 in the 22nd over, while their 50 -partnership came off 125 balls. They made good use of heavy roller in the morning, which might have sedated the pitch somewhat.
To their discredit, India didn?t even create a single half-chance for getting a breakthrough this morning.

On day one, India were bowled out for 187 runs in their first innings after opting to bat. Virat Kohli (54) and Cheteshwar Pujara (50) scored contrasting fifties while Kagiso Rabada finished with 3-39.

On day two, Jasprit Bumrah (5-54) picked up his maiden five-wicket haul in Test cricket as South Africa were bowled out for 194 in their first innings. Hashim Amla scored 61.

On day three, brave knocks from Virat Kohli (41) and Ajinkya Rahane (48) carried India to 247 in their second innings before play was halted early on account of dangerous pitch.

South Africa have already won the three-match series with a 2-0 lead after winning the first Test in Cape Town by 72 runs and the second Test in Centurion by 135 runs.