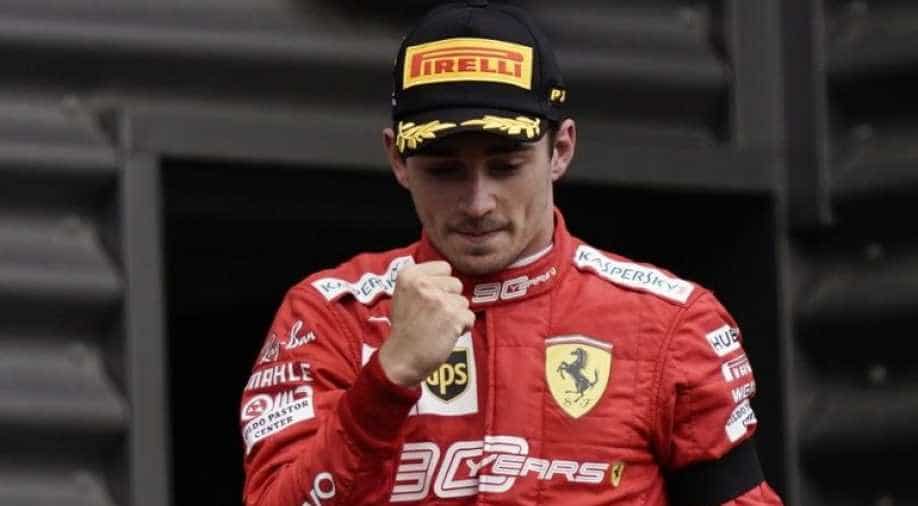 Leclerc is widely tipped as a future champion

Lewis Hamilton on Monday predicted more success for his triumphant Ferrari rival Charles Leclerc and tipped the Monegasque driver as the favourite for this week's Italian Grand Prix at Monza.

After finishing second behind Leclerc at the Belgian Grand Prix on Sunday, a race weekend overshadowed by the death of French Formula Two driver Anthoine Hubert a day earlier, Hamilton forecast that having finally secured his maiden win, Leclerc would now go on to claim more victories.

"Ferrari are going to have a happy weekend at Monza," said the defending five-time champion and current series leader.

"They are so much faster than us and Monza is all straights ... We will do our best, but it is going to be a tough job to match them."

Hamilton increased his lead in this year’s title race to 69 points ahead of re-signed Mercedes team-mate Valtteri Bottas, who came home third, and was quick to praise 21-year-old Leclerc for his performance under pressure.

Leclerc, who started from pole and resisted intense Hamilton pressure as he chased him in the closing laps, dedicated his win to his late friend Hubert.

"He did a great job," said Hamilton. "Even if we had different strategies, it would have been hard to have beaten him. He deserved to win."

Leclerc, widely tipped as a future champion, performed with grace and humanity on and off the circuit during a stressful race weekend that saw him move within 12 points of his Ferrari team-mate and four-time world champion Sebastian Vettel in the drivers’ standings.

He has now out-qualified Vettel at six races in succession, leaving the German battling to retain his status as Ferrari’s lead driver.

On Sunday, Vettel was asked to pull over and allow Leclerc to pass mid-race on his way to finishing fourth. It is now more than a year since his last win, ironically at Belgium in 2018.

"I think his results speak for themselves really," added Hamilton, referring to Leclerc, who has delivered five podium finishes in his last seven outings.

"It's not easy for any driver to jump into a top team, let alone Ferrari... and then to be continuous from race one, out-perform, out-qualify and out-drive a four-time world champion is not easy to do.

"So I think that speaks for itself. He's been really unlucky in quite a few races this year. Could easily have been the third win today.

"So, there's a lot more greatness to come from him and I'm looking forward to seeing his growth and racing alongside him ... Today, it was fun, trying to chase him. He was just a little bit too quick."

While Leclerc finally seized a victory, another young driver impressed by finishing fifth —- Red Bull rookie Alex Albon climbing from 17th to secure a strong result in his first race with the team following promotion from Toro Rosso.

"I’ve been very impressed with Alex’s performance and he put in a great recovery drive in his first race," said Red Bull team chief Christian Horner of the London-born Thai racer.

His Red Bull team-mate Max Verstappen made a poor start and retired after crashing on the opening lap.

"I had some good fun out there and I enjoyed this race a lot," said Albon. "I started off the weekend very nervous and if you had told me I’d finish the race fifth I’d be very happy, but I’m a bit more relaxed now."