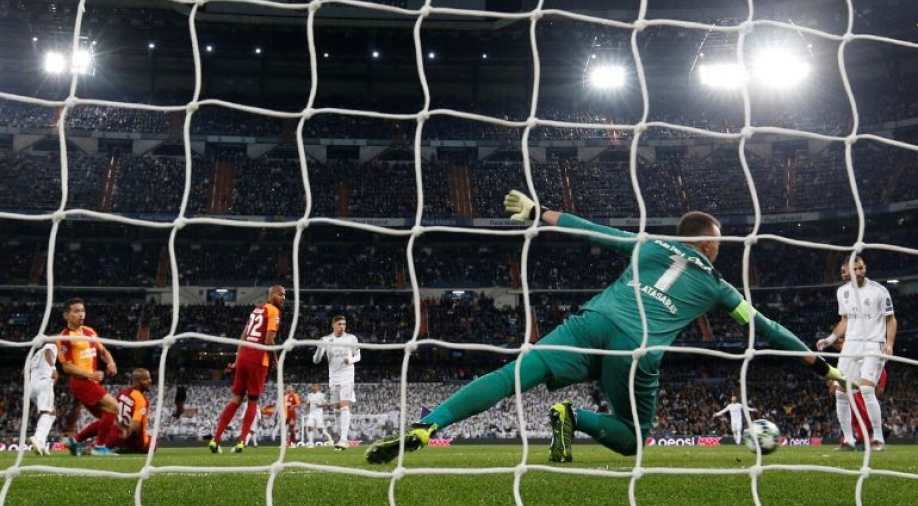 Real did not ease off after their rampant start and extended their lead in the 13th minute with a typically cheeky 'Panenka' penalty from captain Sergio Ramos.

Real Madrid's teenage forward Rodrygo scored a blistering hat-trick as his side pummelled Galatasaray 6-0 at home on Wednesday to take a giant step towards qualifying for the Champions League knockout stages.

The 18-year-old Brazilian put the 13-times European champions ahead in the fourth minute by turning two defenders in the area and firing into the bottom corner to score for the first time in Europe's elite competition.

Rodrygo struck again in the seventh by nodding home a cross from compatriot Marcelo, completing the fastest double in Champions League history.

Real did not ease off after their rampant start and extended their lead in the 13th minute with a typically cheeky 'Panenka' penalty from captain Sergio Ramos.

Karim Benzema netted their fourth on the stroke of halftime, knocking the ball into the net after another thrilling piece of play from Rodrygo.

Benzema struck again from close range in the second half to move on to 50 Champions League goals for his club, moving ahead of Real great Alfredo Di Stefano as the Spanish side's third top scorer in Europe's top competition.

But the night belonged to Rodrygo, who rounded off a dream home European debut at the Santiago Bernabeu by completing his treble in added time, racing towards goal and exchanging passes with Benzema before tapping into the net.

The Brazilian, who became the second-youngest player to score a hat-trick in the Champions League after Real great Raul, was serenaded by the home crowd.

"Hearing the Bernabeu singing my name is a dream come true," Rodrygo said. "I'm so happy, it has been a joyous night but I must try and stay calm."

Benzema, a veteran of great European nights at Real's home, was delighted for his strike partner.

"Rodrygo is only 18 years old but he is fearless. I love to see a young footballer play this way," the Frenchman said.

"We scored six goals and didn't concede any so we are in a party mood tonight."

Real, who picked up only one point from their first two games in the competition, are second in Group A with seven points from four matches.

Their next opponents Paris St Germain are top with 12, with Club Bruges third on two and Galatasaray bottom on one.

Victory over PSG, who have reached the last 16, would send Real into the knockout stage with a game to spare.