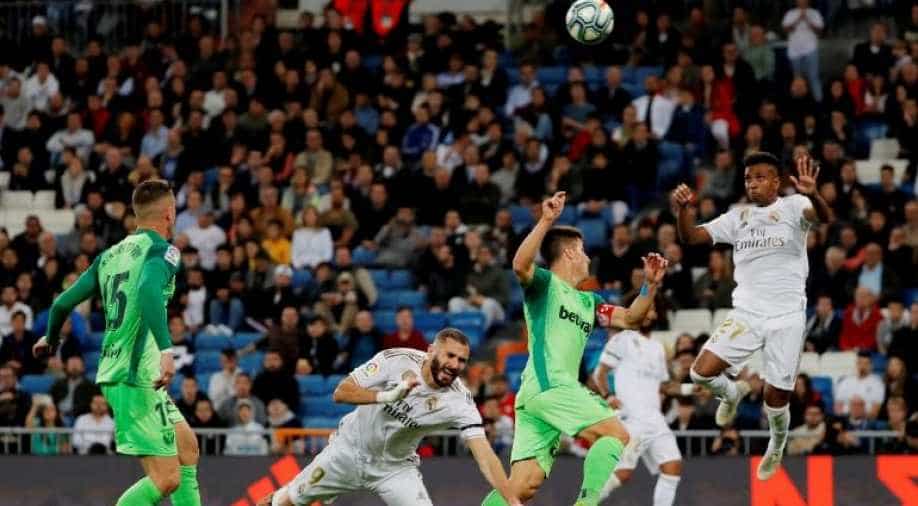 Karim Benzema was the star of the show, the Frenchman rounding off a superb attacking display with a goal from the penalty spot.

Real Madrid registered their biggest win since Zinedine Zidane's return as coach on Wednesday as they demolished struggling Leganes 5-0 to move up to second in La Liga.

Karim Benzema was the star of the show, the Frenchman rounding off a superb attacking display with a goal from the penalty spot after Rodrygo, Toni Kroos and another spot-kick from Sergio Ramos had already put Leganes out of sight. Luka Jovic added a fifth in injury-time.

"We have not scored five goals for a long time," said Zidane. "We needed a victory like that. When you start scoring goals, it makes everything easier."

Gareth Bale was absent as he continues to recover from a calf injury but Madrid hardly missed the Welshman, whose future has again been up for discussion this week after he was pictured returning to London.

Zidane had struck a conciliatory tone on Tuesday too but Bale's team-mates flourished in his absence, albeit against a limp Leganes side, who remain rooted to the bottom of the table after sacking their coach Mauricio Pellegrino last week.

This was not a performance to recommend caretaker manager Luis Cembranos for the job long-term.

Yet there were some impressive Madrid showings nonetheless, not least from Benzema, who has been Zidane's most consistent performer by far in recent months and now has seven goals already in all competitions.

"It's not just the goal, it's what he does for the team," Zidane said. "He doesn't surprise me."

Rodrygo, the 18-year-old making only his fourth senior appearance, came into Bale's position on the right and, particularly in the first half, he shone, grabbing an early goal and providing the frightening turn of pace that Bale once offered before injuries took their toll.

"He is 18 but you don't have to be old to score here," Zidane said. "He has character and he is getting better and better."

Perhaps the only question mark was Eden Hazard, who still appears short of his best in a Madrid shirt.

There were glimpses of the Belgian's undeniable brilliance but moments of indecision too, that suggest he is finding his feet, and fitness, at his new club.

Madrid's victory keeps them just a point behind Barcelona, who thrashed Real Valladolid on Tuesday, and pushes them one ahead of Atletico, with a game in hand over their city rivals.

Two goals arrived in the seventh and eight minutes and Benzema provided each of them, first keeping alive Hazard's cross for Rodrygo to poke home before teeing up Kroos to flick in at the near post.

Leganes looked jaded, without belief or direction, and they fell three down before the interval as Hazard was fouled by Juan Soriano after a superb through ball from Casemiro.

Ramos missed the penalty but was given a second attempt, VAR prompting a re-take for the first time in La Liga after Soriano sprung off his line too early. This time, Ramos made no mistake.

Benzema had hit the post after a smart dummy from Hazard before finally he got the goal he deserved after Luka Modric earned a spot-kick with a slick turn around Kenneth Omeruo. Benzema converted and then departed to a standing ovation.

Jovic was his replacement and after having one goal ruled out for offside the Serbian also made his mark. Dani Carvajal's cross offered up a simple header to make it five.