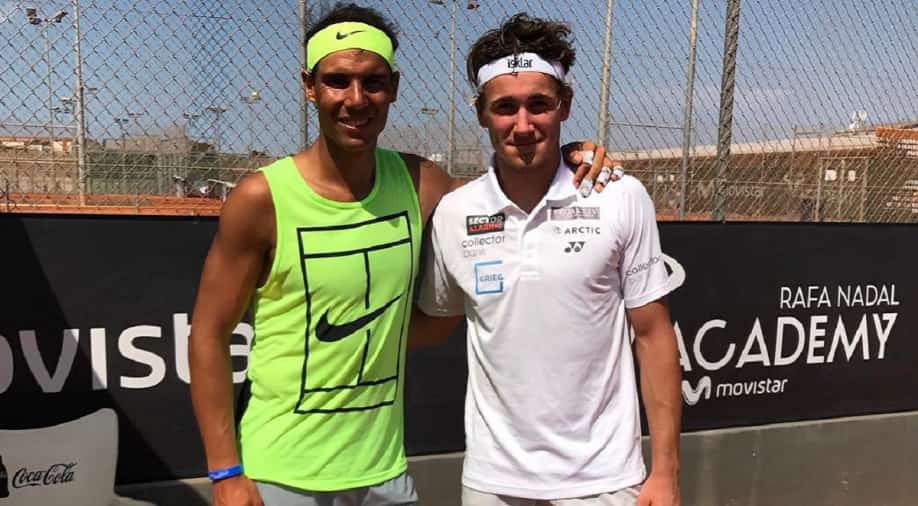 Casper Ruud with Rafael Nadal at his academy in Spain. Photograph:( Instagram )

Casper Ruud will be standing between Rafael Nadal and a record-extending 22nd Grand Slam title for the mighty Spaniard when they lock horns against each other at the French Open 2022 final on Sunday (June 05). Ruud, a former Nadal Academy graduate will be up against his mentor in one of the biggest matches of his career so far.

Casper Ruud will be up against his mentor Rafael Nadal in the men's singles final of the French Open 2022 on Sunday (June 05). Rudd has so far won six titles in his career, five of which have come on clay. He has an exceptional game for the claycourt and has been one of the most consistent players in this year's French Open. However, the Norweigan is set to play the biggest game of his career so far in the summit clash against Nadal on Sunday as he will be tasked to stop the raging Spaniard, who has been invincible at the Roland Garros.

Nadal, one of the greatest of all time, has dominated at French Open over the years and is yet to lose a final at Roland Garros. He has not lost once in 13 final appearances so far in the prestigious competition and will be bidding for a 14th title at the Court Philippe Chatrier on Sunday.

If he manages to win the trophy, it will also be a record-extending 22nd Grand Slam title for Nadal, further extending his lead over arch-rivals Novak Djokovic and Roger Federer, who are both tied on 20 titles each. But standing in between him and the 22nd Grand Slam crown will be Ruud, who is the first man from his country to reach a Grand Slam singles final.

Several greats in the past, including the likes of Federer, Djokovic and Stan Wawrinka among others have tried to stop Nadal in a French Open final. However, they have all failed with the Spaniard maintaining a perfect 13-0 record. But Ruud will have some advantage this time around having played against Nadal several times at his academy.

Not many know, but the Norweigan used to train at Nadal's academy in Manacor as a teenager and played several practice games against the Spanish icon. Ruud will be hoping to bring all his experience to use in the final against Nadal with his maiden Grand Slam title in sight.

Ruud trained under Nadal and got to learn the tricks and trade of te sport from him after he was sent to the Rafa Nadal Academy in 2018. The academy is run by Nadal's former coach and his uncle Tony along with the other members of his family and team.

Ruud's father Christian Ruud had revealed how his son got a chance to train at Nadal's academy and also stated that they enjoy a great relationship with the coaches and staff at the academy.

"When Casper Ruud was [a teenager], Carlos Costa came to me during the French Open and was wondering if he wanted to come [to the Rafa Nadal Academy] and try it out," Christian Ruud said. "It was a big step for us. We are very happy with our relationship with them, and hope it will continue for many years," Ruud's father had recalled in an interview.

Talking about training with Nadal at his academy in Manacor, Ruud said he almost always got beaten by the Spaniard in practice matches between the duo. However, the Norweigan warned his mentor that it won't be his disciple but his opponent who would turn up against him at the French Open final on Sunday.

"We have played some practice sets (at the academy). And, yeah, it's been, I don't know honestly, but (Nadal) always pretty much has always beaten me. There's been some close sets, 7-6, 7-5, but it always goes his favor. But it's because we are playing in the academy and I want to be nice to him and give him (the win)," Ruud joked after beating Marin Cilic in the semi-final.