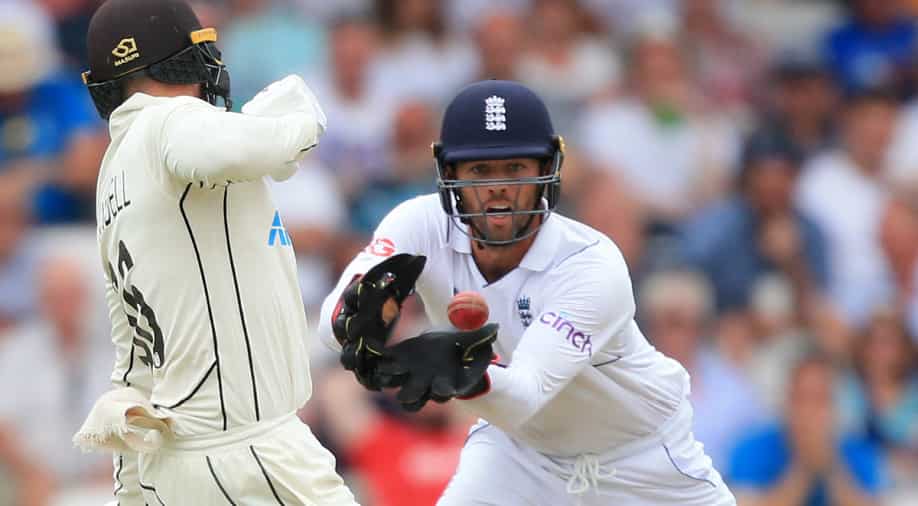 Ben Foakes has been ruled out of Headingley Test after testing positive for COVID-19. Photograph:( AFP )

England wicket-keeper Ben Foakes has been ruled out of the ongoing 4th Test against New Zealand in Headingley after testing positive for COVID-19.

England wicketkeeper batter Ben Foakes has been ruled out of the ongoing Test against New Zealand at Headingley after contracting COVID-19.In his absence, Sam Billing has been drafted into the XI as a COVID replacement. Billings has been part of Kent in the Vitality T20 Blast but will slot straight into the playing XI.

Foakes complained of a stiff back on Saturday and did not take the field on day three of the third Test between England and New Zealand. In his temporary absence, Jonny Bairstow took the gloves. "The rest of the England party follows health protocols of symptom reporting and subsequent testing if required. There are no other positive cases in the camp," read ECB`s statement.

The further medical assessment showed that Foakes was positive for COVID-19 after taking the Lateral Flow Test. Furthermore, his availability for the Test against India is also in doubt.The rescheduled Test, which is set to begin on July 1, has already been marred by bad news after India skipper Rohit Sharma tested positive for COVID as per an update by BCCI earlier today.

Subject to recovery, Rohit is set to lead the team against England in the postponed fifth Test match starting July 1 in Edgbaston. India leads the series 2-1.England are already enjoying a 2-0 in the three-match Test series over New Zealand.

The rescheduled match is a part of last year`s five-match Test series that had to be delayed after the fourth Test due to a Covid-19 outbreak in the Indian camp.The warm-up fixture is an opportunity for the Indian players to get used to the new conditions after a long time for the all-important fifth Test.