Been a hectic schedule but looking to finish India series on a high, says NZ skipper Tim Southee 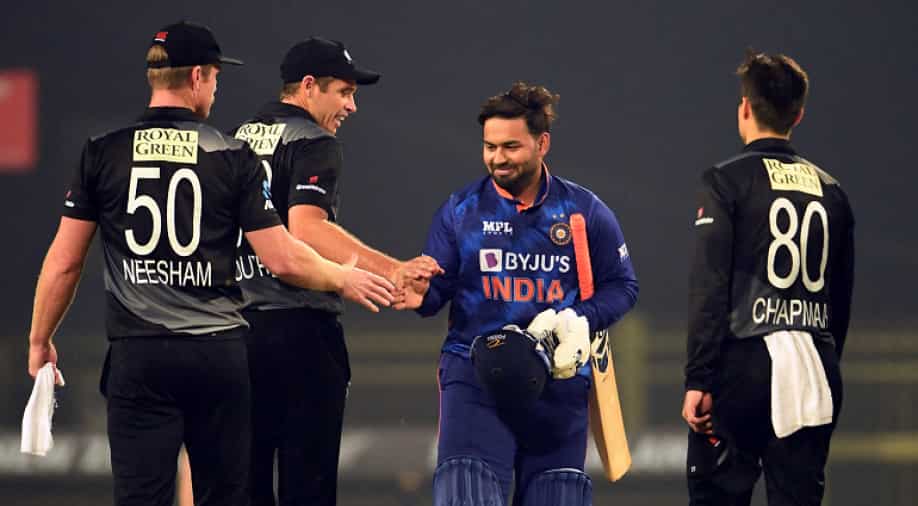 New Zealand will be looking to bag a consolation win in third T20I on Sunday. Photograph:( AFP )

New Zealand skipper Tim Southee said the Black Caps will be looking to finish the T20I series against India on a high after two back-to-back losses.

New Zealand stand-in skipper Tim Southee said the Kiwis are looking to finish the T20I series against India on a high when the two sides meet in the dead rubber on Sunday. India sealed the series with a 2-0 lead after registering a thumping seven-wicket win over New Zealand on Friday.

After the defeat, Southee pointed out towards "hectic schedule" which has seen the Kiwis playing India in the T20Is just three days after the conclusion of the T20 World Cup.

"It`s been a hectic schedule, not only this (India T20Is) but obviously on the back of the World Cup. But the guys have got one last push, a number of guys go home after this next game, so hopefully, we can finish the tour on a high," said Southee in the post-match press conference.

"It`s another opportunity to represent your country, so I don`t think you need any extra motivation to get yourself up. It`s a great place to play cricket, coming here today in front of a full house. I`m sure the guys will be up to finish the tour on high," he added.

India lost three wickets during the chase and all were picked by Southee who returned with figures of 3-16 in his quota of four overs. "I was just trying to replicate how the Indian bowlers bowled but it was tough for our spinners to get a good grip on the ball. India were just too good tonight," said Southee.

The New Zealand stand-in skipper negated the toss factor but admitted that dew played a role in the second T20I and will be there in the last game as well.

"We knew the dew will going to be a factor and it will be there in the next game as well. So we have to try and adapt to the conditions. Dew played a role for both sides, it was there in the first innings but it may have gone a little worse in the second innings. So winning the toss was not a crucial factor today (Friday)," he signed off.