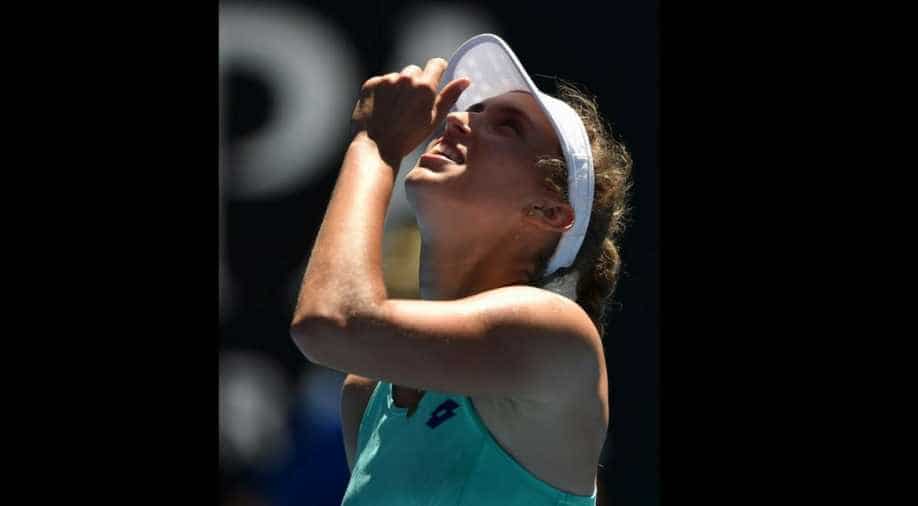 The Belgian world number 37, on a 10-match unbeaten streak after winning in Hobart this month, knocked out the Ukrainian 6-4, 6-0 in 1hr 13min.

Mertens, who is yet to drop a set, is the first Belgian to make the last four since Kim Clijsters in 2012.

"I'm lost for words. I don't know what to say. I just gave my all today," she said. "I played my game today and tried to stay aggressive."

Mertens, 22, trains with her coach and boyfriend Robbe Ceyssens at the Kim Clijsters Academy in Belgium and has seen her world ranking rise from 127 at the end of 2016.

She had never been beyond the third round of a Grand Slam before in four appearances.

"He means a lot," she said of the importance of Ceyssens.

"He's by my side all the time. Since we have been together my game has only gone upward. All credit to him."

Mertens made all the initial running, returning aggressively and mixing up her game cleverly, taking every opportunity to approach the net and cut off Svitolina's passing avenues.

She broke the world number four in the third game and then again for a 5-2 lead.

Serving for the set, Mertens tightened and a double fault on break point handed the Ukrainian a way back.

Mertens still had a second chance to serve out. Another double fault allowed Svitolina a glimmer at 15-30, but Mertens composed herself and landed three first serves to secure the set 6-4.

The Belgian had powered 16 winners to Svitolina's eight and significantly won nine of 12 points at the net.

Svitolina was immediately in trouble at 0-40 at the start of the second.

She saved those but a weak forehand into the net gave a fourth and Mertens landed an overhead smack on the sideline to secure the break.

Another break followed, and the third courtesy of a sumptuous backhand pass took Mertens to the brink of the last four at 5-0.

She completed the humbling of Svitolina with little fuss and will face either second seed Caroline Wozniacki or unseeded Carla Suarez Navarro for a place in Saturday's final.

If she makes it she will emulate Clijsters, who won at Melbourne Park in 2011.

Mertens had a message for her countrywoman and tennis great who she said would be following the match in the middle of the night back home.

"Kim, thanks for watching and don't get too stressed."