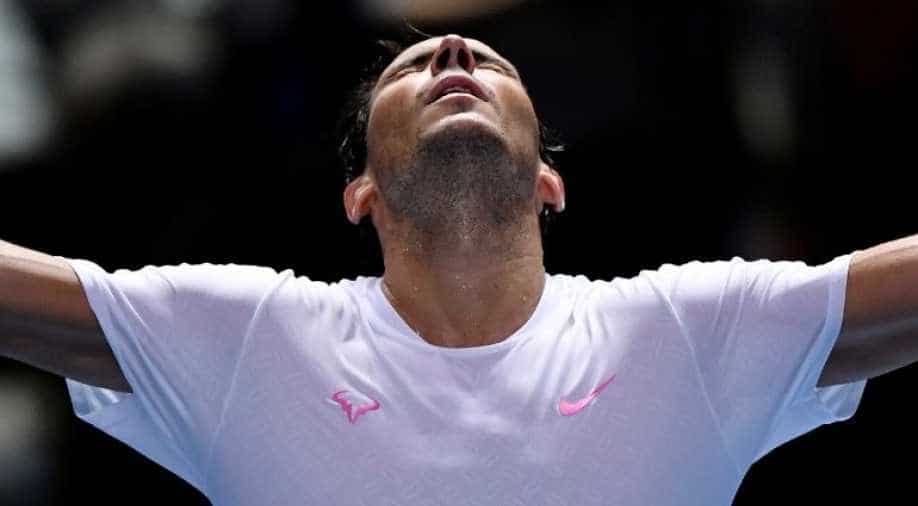 The world number one will require a victory over in-form Greek Stefanos Tsitsipas on Friday to have a chance of reaching the semi-finals.

Rafael Nadal produced an incredible fightback to beat Russian Daniil Medvedev and keep his ATP Finals hopes alive on Wednesday, saving a match point at 1-5 down in the decider before winning 6-7(3) 6-3 7-6(4).

The world number one will require a victory over in-form Greek Stefanos Tsitsipas on Friday to have a chance of reaching the semi-finals. Tsitsipas, 21, is definitely there though after thrashing Alexander Zverev 6-3 6-2 in the evening match.

Nadal looked beaten as 23-year-old debutant Medvedev broke serve twice in the decider to stand on the brink of a first career victory over the Spaniard he pushed to five sets in an epic US Open final in September.

For once world number one Nadal's trademark fighting spirit seemed to have ebbed away but he saved a match point at 1-5 with a superb drop shot and was suddenly re-energised.

Twice Medvedev served for the match, at 5-2 and 5-4, but he tightened up and world number one Nadal, roared on by the 02 Arena crowd, needed no second invitation to take advantage.

Nadal has never won the ATP Finals title, the only gap on a CV that includes 19 Grand Slam titles and Olympic gold.

He was beaten by German defending champion Zverev for the first time on Monday in his opening round-robin match and defeat by Medvedev, who he had also never lost to before, would have left him on the brink of elimination.

After an astonishing recovery, however, he will go into his final group game against Tsitsipas with everything to play for as he bids to not only win the title for the first time but also seal the year-end world number one ranking.

Nadal arrived in London with concerns over an abdominal injury, but even when not at his sharpest he remains one of the hardest players on Tour to finish off.

"Honestly I've been super lucky," he said on court. "For Daniil it's a tough loss. He was playing much better than me in the third set of course but it was one of these days when you have a one in a thousand chance to win."

The deceptively powerful Medvedev dropped only six points on serve in the opening set and comfortably bagged the tiebreak.

His focus dipped at the start of the second though, allowing Nadal a quick break and when the Spaniard broke again to take the set it seemed the momentum was with him.

Medvedev played superbly in the deciding set though, until 5-1. A dreadful Nadal backhand slice gave the Russian a first break and when he chased down a drop shot to flick a winner past Nadal on his way to a 4-0 lead he was in command.

But from 1-5 down Nadal reeled off five straight games and when Medvedev trailed 0-30 at 5-6 he seemed to be a spent force.

Medvedev regained his composure in the nick of time to hold serve with an ace and looked dangerous again in the tiebreak.

But he missed an easy forehand at 4-5 to give Nadal two match points and then a backhand went agonisingly wide to hand the Spaniard one of the most remarkable wins of his career.

"Rafa could say, okay, it's over at 5-1 and just give me the point, but we all know Rafa is not about this," Medvedev said.

The maths of the group means a straight-sets win for Medvedev over Zverev could see him progress to the semis.

Nadal's tournament fate is not in his own hands though. He must beat Tsitsipas and hope that Medvedev beats Zverev.

Even if he does not reach the semis, Nadal tightened his grip on the number one ranking as Novak Djokovic now must win the title to have a chance of overtaking him.

Djokovic faces Roger Federer on Thursday in a must-win match for both players.