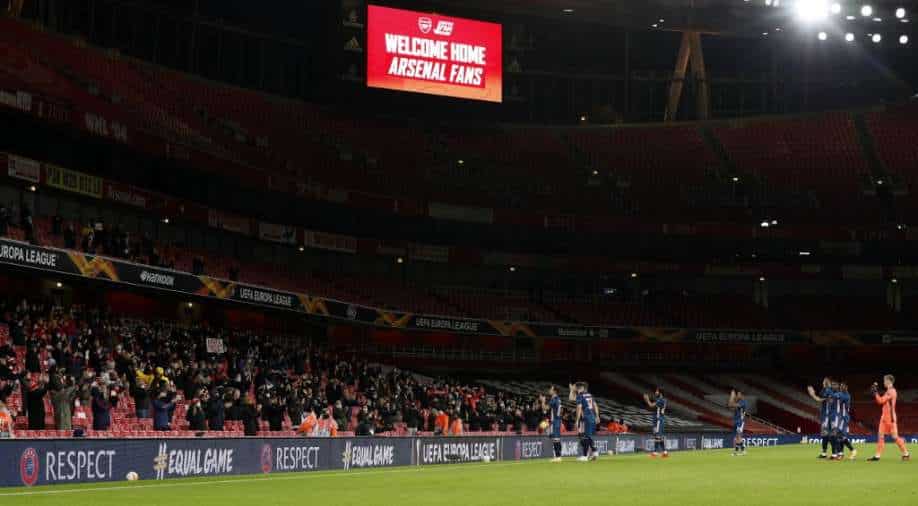 For the first time in 270 days, fans were back inside a Premier League ground as Arsenal welcomed 2,000 supporters into the Emirates for Thursday's routine 4-1 Europa League win over Rapid Vienna.

For the first time in 270 days, fans were back inside a Premier League ground as Arsenal welcomed 2,000 supporters into the Emirates for Thursday's routine 4-1 Europa League win over Rapid Vienna.

The sparse crowd in a 60,000 capacity stadium were well distanced between two stands and in high spirits despite the Gunners' poor form of late in the English top-flight.

"I'm delighted to have fans back they make a huge difference," said Arsenal coach Mikel Arteta.

"We had 2,000 but they were loud and they were supportive to the team so thanks to them for coming and making the effort."

Outside the ground before kick-off fans held up a banner reading: "Home at last, Thank you NHS" in tribute to those working on the front line battling coronavirus in the health service.

Arsenal's last home match with a crowd was back in March prior to a three-month stoppage of the sport due to the pandemic.

Since returning in June, English top-flight football has been played behind closed doors with Arsenal fans missing out on seeing their side win the FA Cup and Community Shield at Wembley.

"It's been a long nine months since the last game," said Javed Singh. "I'm excited, it's a bit of a dead rubber game but good to be back in the stadium. Just great to see a game in person."

Despite Arsenal having already booked their place in the Europa League knockout stages, demand from fans to be one of the lucky few back through the gates crashed the club website on Saturday morning.

"It's one of those games you will look back on that we were the first ones in the stadium," said Dan Anderson, who attended the game with his brother as normal.

"It's just getting back to normal. You work hard all week and to have that reward to be able to go to a game at the weekend or at night is what you want."

However, it was not a return to normality for everyone. Pubs that would typically be crammed with fans on matchday around the stadium remained shut with London still under tier two restrictions meaning alcohol cannot be served without food.

Restrictions remain even tighter in other parts of England in Tier three such as Manchester and Birmingham where fans remain shut out.

"Football is all about you, the fans - we have missed you and we are so happy to be welcoming you back," said Arsenal skipper Pierre-Emerick Aubameyang in a video played before kick-off.

Club mascot Gunnersaurus was also back after the controversy that saw the club employee, Jerry Quy, who played the role since 1993, let go amid cost-cutting measures before Arsenal midfielder Mesut Ozil stepped in to cover his salary.

Playing an entire season without crowds would cost Premier League clubs an estimated £700 million ($941 million) and the need to make the most of the fans' return was evident with Arsenal's "Armoury" club shop reopened.

The atmosphere inspired a much-changed side on the field as Arteta looked ahead of Sunday's North London derby against Premier League leaders Tottenham.

Spurs were the target of the first chants once the action got underway, showing some things never change no matter the circumstances.

There was soon something to cheer as Alexandre Lacazette smashed in a stunning long-range strike top open the scoring on 10 minutes and ran to celebrate in front of the fans.

"It's just great to have that sound back and have our 12th man back," said Arsenal midfielder Ainsley Maitland-Niles.

Pablo Mari quickly headed home a second on his first appearance since March.

Eddie Nketiah added a third before half-time before Kohya Kitagawa's consolation for the Austrians drew pantomime boos from the crowd.

Substitute Emile Smith Rowe rounded off the scoring on a night that will be best remembered for what happened off the field.