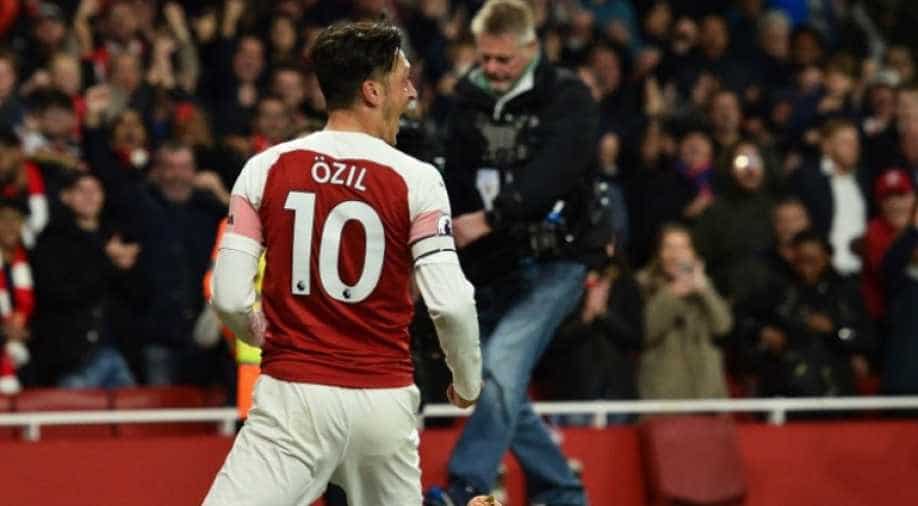 Pierre-Emerick Aubameyang came off the bench to score twice and Mesut Ozil scored the other to stretch Arsenal's winning streak in all competitions to 10 games of this season.

Mesut Ozil shrugged off his poor start in the ongoing edition of Premier League by scoring a goal in Arsenal's 3-1 win against Leicester City on Monday.

Pierre-Emerick Aubameyang came off the bench to score twice and Mesut Ozil scored the other to stretch Arsenal's winning streak in all competitions to 10 games of this season.

Arsenal has been in a commanding position since the start of the season as, now, they rose to fourth with 21 points from nine games, two points behind Manchester City and Liverpool and level with third-placed Chelsea.

Arsenal enjoyed the clash against Leicester but the highlight of the match was Ozil, who netted the equaliser just before half-time and played a key role in Aubameyang's second-half double, at the Emirates Stadium.

Didn’t even realize how involved Ozil was all the way from start to finish in this goal pic.twitter.com/77BxapIlx6

Ozil shared his excitement, tweeting after the match: "I think we played some sexy football tonight. Proud captain of this team."

I think we played some sexy football tonight 😎💪🏼 Proud captain of this team and this club! © #YaGunnersYa ❤ #M1Ö @Arsenal pic.twitter.com/iPFGxViAes

Arsenal was put under pressure when they trailed after Hector Bellerin's first-half own goal in the first half.

"I think after 1-0 the reaction of the team was very important, with quality, also very organised, and also (we showed) heart," said Emery after the match.

He also praised Ozil's performance, "I am very happy with all the players. I think the (good) performance is with all the team. He is giving us, like each player, his quality, and his capacity."

"We are demanding a lot of regularity. Mezut Ozil today produced a very good performance. It was a very good victory together. We are carry on pushing and demanding, for ourselves and also for him, this regularity," he concluded.