After Messi, ISIS threatens to 'behead' Ronaldo ahead of Russia World Cup 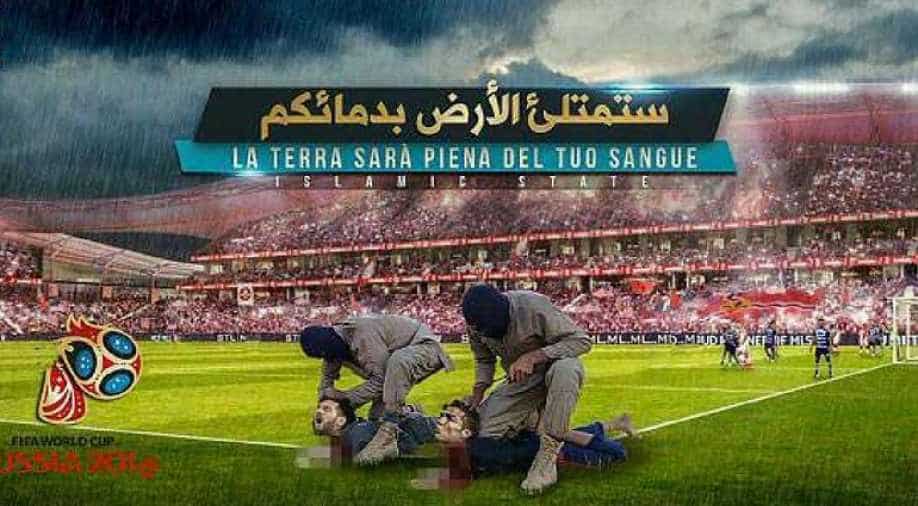 A pro-Islamic State(IS) organisation which earlier targeted football star Lionel Messi, has now threatened to kill and be head, Cristiano Ronaldo, ahead of the 2018 FIFA World Cup.

A mocked-up image was also released where both Messi and Ronaldo pinned down on the pitch in a packed stadium with knife-wielding terrorists hacking at their necks.

The second poster released shows a militant carrying what appears to be an explosive device into a stadium. It comes with the message: 'Fifa World Cup Russia 2018 - victory will be ours'.

It is the latest in a series of online threats made against this summer's football tournament and Barcelona star Messi has been the target of similar warnings earlier also.

Last year, the organization released a chilling image of Messi behind bars with blood-soaked eyes, threatening to unleash violence in this year's football World Cup.

The poster released by the Wafa media foundation said: “You are fighting a state that does not have failure in its dictionary,” ending with the message "just terrorism", which is the famous American shoe company Nike's tagline "just do it".

The Messi poster was tweeted by SITE intelligence group, a company which tracks terror activities online.

'The ground will be filled with your blood': #ISIS fanatics threaten to BEHEAD #Messi and #Ronaldo in posters warning of attacks at the World Cup pic.twitter.com/sQLYVo0XTb

Tens of thousands of England fans are expected to base themselves in St. Petersburg for the month-long finals.

St Petersburg, Russia's second largest city, was the scene of a horrific ISIS attack when a briefcase bomb detonated on the underground in April last year, killing 14 people.

The blast was in retaliation to Russia's airstrikes in Syria that have helped bring the regime to its knees.

Thousands of Russians from mainly central Asia have travelled to the Middle East to fight for ISIS.