A captain, a mentor and a coach: Too many cooks messed up the meal? 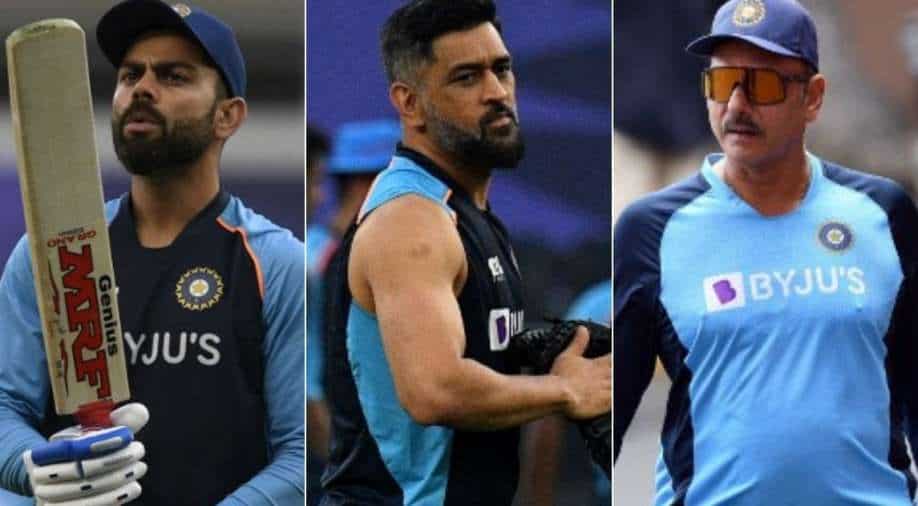 There's a need to analyse where the strategy went wrong as India exited the ICC Men's T20 World Cup 2021, without making it to the semi-final

The Indian cricket team bowed out of the ICC Men's T20 World Cup 2021 on a winning note after defeating Namibia in their final match of the Super 12 stage. The inaugural champions finished third in Group 2, behind Pakistan and New Zealand, which means they failed to make it to the semi-final of the showpiece event. In the leadership of a talented captain Virat Kohli, the confident Indian cricket team had entered the tournament eying the coveted trophy but it didn't happen. Or was it overconfidence?

There's no doubt that India were hot favourites to win in the presence of players, who have been performing well of late. To make the run exciting and to boost the camp's morale, the Indian cricket board decided to include an accomplished player as a mentor of the team. Former skipper Mahendra Singh Dhoni - with the experience of winning two World Cups as a captain - added the oomph factor as the team's mentor. Or was it only in black and white?

Ravi Shastri, whose tenure as the head coach of the Indian cricket team ended with India's run in the Twenty20 World Cup 2021, was another factor for the fans to have immense belief in the team as under the guidance of Shastri, India reached new heights as he guided India to became the first Asian team to win a Test series in Australia (2018-19) and triumphed again Down Under in 2020-21. India emerged as one of the best teams in recent times in red-ball cricket as they climbed to the top of the Test rankings. They even reached the final of the inaugural World Test Championship, where they were beaten by New Zealand.

However, sans trophy, India's performance in white-ball cricket can be a matter of discussion with some positives and some negatives too... considering India also crashed out in the semi-finals of the 2019 World Cup in England. Shastri must have wished to end his stint with a trophy. But did he become complacent?

Already announced that he will step down as the captain in Twenty20 format to manage workload, it was Virat's last opportunity to win a T20 international trophy as a skipper, which he deserved and rightly so because for the past few years he has been carrying the team and carrying it well. The level of athleticism he brings with himself is incredible, similar discipline emits from other players also... which is extraordinary. Practice something is one thing, and to make others follow it, is commendable.

Kohli took over the leadership duties across formats from Dhoni in 2017, his announcement to step down as the captain of T20 cricket came as a shock to many, some welcomed it as the decision means India will have new leadership... and change is always better. is also as it is definitely an opportunity. However, the timing of Virat's decision is questionable. Did Virat's announcement make the dressing room unsettled and less focused?

India beat Afghanistan (by 66 runs) and Scotland (by eight wickets) and Namibia (by nine wickets) but the real test was against Pakistan and New Zealand where India suffered a 10-wicket and an eight-wicket loss respectively. In the first two matches that they lost, their body language was just not right, it was nowhere even close to how it has been in the past and how it should be.

All in all, the magic of 'mentor' was missing, the style of the 'skipper' was in short supply and the class of 'coach' was not there.

There's a famous saying that too many cooks spoil the broth and yes, the meal that the Indian team cooked, was definitely not good. The fans didn't like it, the critics didn't appreciate it, even the players must have a bad taste in their mouths.

It's time to retrospect how the tried and 'tasted' recipe failed. How the mystery of a 'mystery spinner' remained an unsolved mystery, how an experienced bowler was unable to bring variations in his bowling, why there's was no replacement of an injured all-rounder?

Now, to understand where the strategy went wrong, the entire team, including the staff members need to go through the 'recipe' again in order to find the missing spice and move on with confidence as a new era awaits. The team and the fans should not dwell in the past.