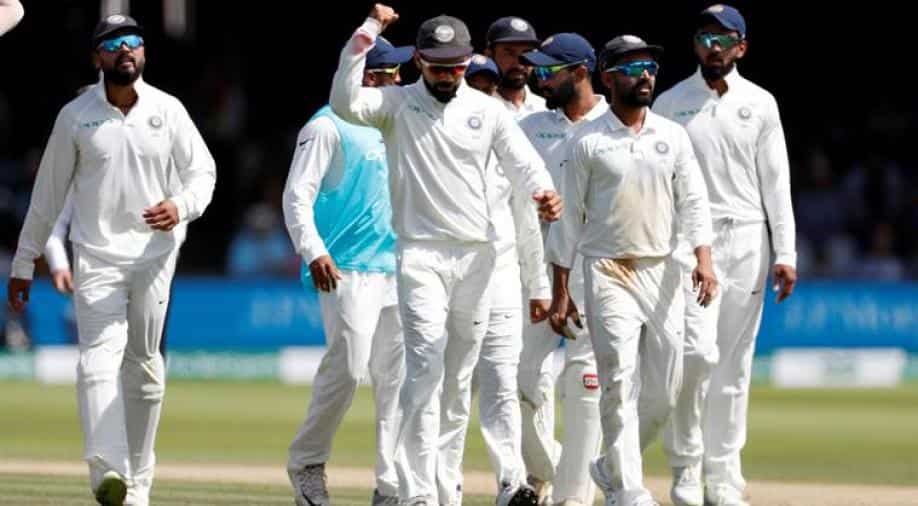 The 'Men in Blue' won the first Test against Windies by a record innings and 272 runs.

India's ruthless home run is unlikely to be challenged when the team takes on a below-par West Indies in the second Test Friday in what threatens to be another lopsided contest.

After the hosts won the first Test by record innings and 272 runs, there are hardly any signs that there will be a change in the script as the second Test promises to be another run-feast.

Add to it, skipper Jason Holder is still not 100 per cent fit and their only fast bowler of repute Shannon Gabriel is a doubtful starter for the encounter. India, on the other hand, have not made any changes to the squad that won the first game inside three days in Rajkot.

The lop-sided matches are hardly the kind of preparation the Indian team would have wanted before the big-ticket series against Australia starting December.

In fact, Virat Kohli's team might not be able to escape a sense of deja vu as it goes into the second Test.

In 2011, India dominated West Indies 2-0 in a one-sided series before crashing to a 0-4 defeat against Australia Down Under.

Similarly, in 2013 when India won both Test matches well inside three days, the next tour of South Africa didn't pan out well as they lost the series.

It is just an indicator that the West Indies Test teams over the years have not been competitive enough to challenge the Indian team, which is anyway formidable on home turf.

In contests like these, the focus is on challenging one's own self which skipper Virat Kohli did in the first Test where he scored 139 off 230 balls.

While 18-year-old Prithvi Shaw expectedly hogged the limelight with a smashing ton on debut, Kohli's innings was a master-class of how to set a different challenge for oneself as a batsman.

The West Indies bowling, which at best can be compared to a lower rung first-class side in India, could have been taken to the cleaners but the Indian skipper hit only 10 fours in his knock -- significantly less than Shaw's 19 boundaries and Cheteshwar Pujara's 14 hits.

The bulk of the runs 99 of them came in singles and doubles. Perhaps, he was trying to check if he curbs certain strokes, how his game will shape up.

He showed a different facet to his batsmanship during the 24th Test hundred.

The only area of concern for India will be vice-captain Ajinkya Rahane's form, who was touted as the best player in overseas conditions back in 2013-14 season, when he scored 96 at Durban, 118 at Wellington, 103 at the Lord's and 145 at Melbourne.

Rahane has gone without a Test hundred for nearly 14 months (last hundred came against Sri Lanka in August 2017). His career has tapered off a bit in the last couple of years.

And the second Test would be last shot to get back into a good frame of mind before the Australia series, which could make or break for him.

Bowling coach Bharath Arun put up a strong argument for the out-of-form KL Rahul (14 failures in 16 knocks this year).

The decision to play him for this Test is a fair enough indication that India will be looking at the Rahul-Shaw combination going into that first Test against Australia in Adelaide on December 6.

Shardul Thakur continues to be the 12th man as a 2-0 series win is paramount for the home team at this point of time.

Mohammed Shami and Umesh Yadav will also like to use this opportunity well as they are unlikely to feature in the ODI series.

For West Indies, the aim will to at least put up some fight, unlike the Rajkot game where they didn't even last 100 overs across both innings.

Kieran Powell's 83 and Roston Chase's 53 were the only notable contributions from the Caribbean batting line-up in the first game.

In the second innings, it looked as if the batsmen were in a tearing hurry to hit every ball where the need of the hour was to show patience.

The West Indies' slide in Test is a combination of both lack of application and technique needed to compete at the highest level.

They would love to redeem themselves, which looks highly unlikely as of now.