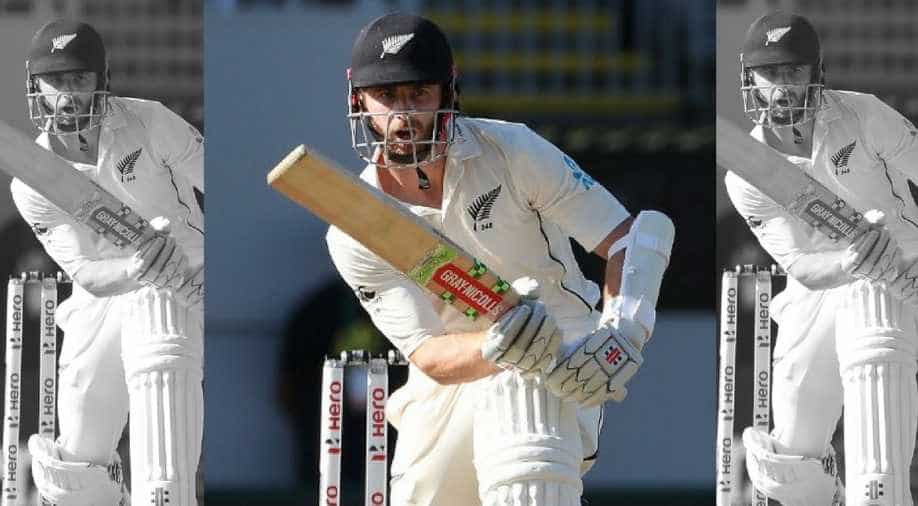 Kane Williamson plays a shot during the first day of the day-night Test cricket match between New Zealand and England. Photograph:( AFP )

A humiliated England faced scathing criticism from "embarrassed" coach Trevor Bayliss while New Zealand celebrated a performance "beyond our wildest dreams" on the opening day of the first Test in Auckland on Thursday.

Bayliss said he was hurt by a scoreboard showing England all out for 58, inside the first session, and New Zealand 175 for three at stumps, ahead by 117 and with Kane Williamson not out 91.

"It was a very poor effort today, it just simply wasn't good enough," Bayliss said after England slumped to their sixth worst Test innings ever.

At one stage they threatened New Zealand's unwanted world Test record low of 26 before an unbeaten 33 by Craig Overton more than doubled their score in a last wicket stand with James Anderson.

"Whenever you don't do well it does hurt," said Bayliss, defending his selections as the best available in England.

"Embarrassed? Certainly, and I probably wasn't the only one in our change room. It's certainly not good enough."

What a day for @BLACKCAPS! They first bundled England out for 58, and then Kane Williamson struck 91* to take them to 175/3. Can it get any better?#NZvENG All the details here ⬇️https://t.co/gs9XvkvSIF pic.twitter.com/cQjrW5k8oU

2nd Englishman after James Anderson (524) and 15th overall to get to the mark. #NZvENG pic.twitter.com/sSz9XFPsZ0

New Zealand only needed two bowlers, Trent Boult who took six for 32, and Tim Southee, who took four for 25, in an innings that lasted just 20.4 overs.

"It was very enjoyable to get out there to get the ball swinging around," said Boult who finished with career-best figures.

"Probably not in our wildest dreams did we think we would win the toss and get them out in the first session.

"The main thing was trying to pitch the ball up, trying to get the ball moving as much as we could and giving it the best chance to swing.

"I don't think it swung that much. The cliche of it just doing enough is pretty much what happened."

Apart from Stuart Broad taking his 400th Test wicket, it was a bleak day for the tourists, with Bayliss blaming their batting woes on "mistakes with our footwork".

But for New Zealand, Williamson commanded the Test from the moment he won the toss and opted to bowl.

He featured in the field with a superb diving catch in the gully to remove Broad and ended the day closing in on a new record for New Zealand Test centuries.

He currently shares the record of 17 centuries with Ross Taylor and the late Martin Crowe.

“It’s what you grow up dreaming of to one day run out there with a fern on your hat and perform like that” #NZvENG pic.twitter.com/wUSHfdcOX4

Williamson went to the middle after the early dismissal of Jeet Raval, when New Zealand were one for eight, and put on 84 with Tom Latham for the second wicket.

Latham had made a patient 26 off 112 deliveries but when play entered the difficult daylight-to-twilight zone he was gone in the first over after dinner to give Broad his milestone scalp.

Williamson had a nervous moment on 64 when Chris Woakes claimed a straight drive from Taylor had deflected off his hand to the stumps, with Williamson backing up out of his crease.

Replays proved inconclusive and the third umpire ruled in favour of the batsman, but Bayliss said Woakes was adamant the ball had brushed his hand.

Taylor never looked completely at ease and on 20 he was caught at mid-wicket by Woakes to give England's most successful Test bowler, James Anderson, his 525th career dismissal.

Henry Nicholls joined Williamson and was unbeaten on 24 at stumps with the pair putting on 52 for the fourth wicket.

Boult started England's downfall when he had Alastair Cook out for five in the fifth over.

There followed a steady stream of batsmen going to and from the crease, five of them departing with a duck -- including Joe Root and Ben Stokes -- with only Mark Stoneman (11) able to join Overton with double figures.

Trent Boult - ‘It was nice to disturb the woodwork and put the side in a good position’ #nzveng #findyournight pic.twitter.com/ItkCvi5VN0