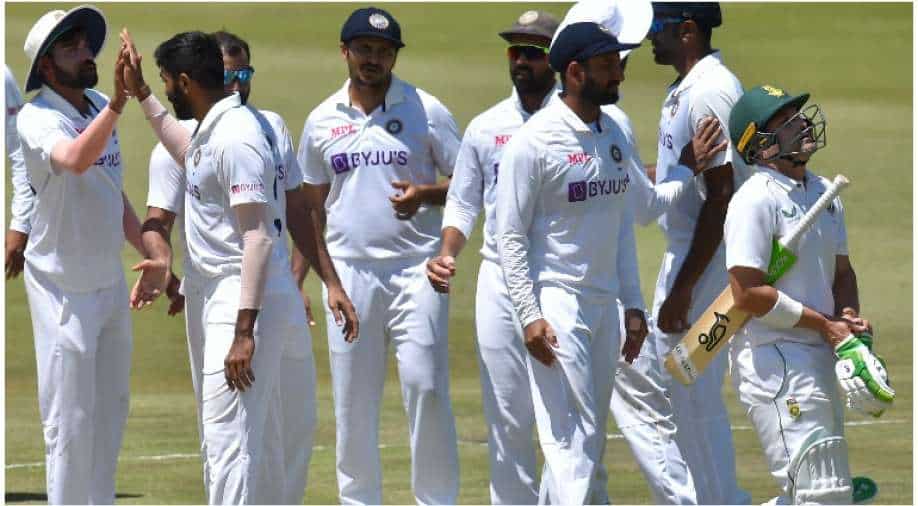 Virat Kohli-led India thrashed South Africa by 113 runs to win their first-ever Test in Centurion and go 1-0 up in the three-match series in the African nation.

Virat Kohli-led Team India beat South Africa by a whopping 113-run margin at the SuperSport Park, Centurion on Thursday (December 30). Resuming the fifth day with only 6 wickets needed to win, India wrapped up the proceedings in style. Jasprit Bumrah, Mohammed Siraj and Mohammed Shami continued to chip in with regular wickets before R Ashwin joined the party and claimed the last two scalps after lunch.

The fifth day started with the Dean Elgar-led Proteas needing 211 more runs to win, after they ended Day 4 at 94-4 in pursuit of 305. Captain Elgar was trapped lbw for 77 by Bumrah before Quinton de Kock-Temba Bavuma steadied the ship for a while. As soon as De Kock chopped one onto the stumps, for the second time in a row, the collapse started for the home side who fell for 191 in 68 overs.

By virtue of their decimation of the Proteas in the three-match series opener, India also breached the hosts' fortress as Elgar & Co. lost their first-ever Test at Centurion since 2014. Earlier, India had started the year by breaching Australia's fortress, i.e. at The Gabba, Brisbane.

Talking about the first Test, Kohli-led India won the toss and rode on opener KL Rahul's 123 to post a competitive 327. In reply, SA only managed a paltry 197 as they conceded a whopping 130-run lead to Team India. Riding on their massive lead, India accelerated but only managed 174 in their second essay, setting up a 305-run target. Nonetheless, Bumrah and Shami's three-fers, Siraj and Ashwin's two wickets apiece ended the Proteas resistance for 191 on the final day. In SA's first innings, Shami had dented the hosts' progress with a stunning five-fer.

For the unversed, this also became India's fourth win overall in the African nation, second under Kohli (in a row). Kohli also has seven victories as India's Test captain in SENA countries (most by any Indian or Asian skipper).

The second Test will commence at The Wanderers Stadium, Johannesburg on January 3.